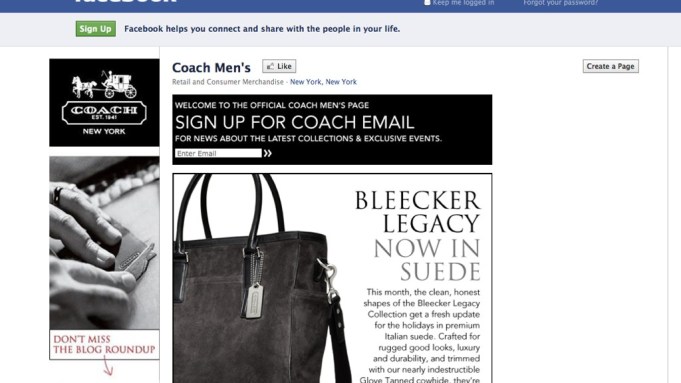 The fashion industry is quickly learning that men and women engage and shop differently in the digital sphere.

Brands and retailers such as Coach, Mr Porter, Gilt Man, Ben Minkoff, John Varvatos and Ermenegildo Zegna have spent a lot of time studying the differences between the ways men and women approach fashion, tapping into their male audiences with a host of initiatives they feel will resonate best with their target consumer.

Whether ingesting rich editorial content from Net-a-porter’s men’s e-commerce counterpart, Mr Porter; interacting with Coach’s new men’s Facebook page, or tapping into Ben Minkoff’s expertise in gender-specific online shopping habits, one thing is clear: Men are as into fashion as ever, and brands need to find innovative ways to engage the male audience.

For women, Coach is one of the industry’s leaders in the social media game — boasting more than 2 million fans on Facebook and several successful blogger projects. But for the past few months, it has decided to focus on its male consumers, according to David Duplantis, the brand’s senior voice president of global Web and digital media, who believes that when it comes to reaching men, creating a digital message that focuses on reinforcing heritage and lifestyle is key.

“Our female customers want to be digitally engaged with more frequency and are more interested in new products, value, celebrity and blogger fashion trends. Men, on the other hand, prefer their engagement with us to be more focused on increasing their knowledge of the product,” Duplantis said.

Coach launched a male-specific Facebook page five months ago that now has almost 14,000 fans. Features such as “Product of the Week” and “Did You Know?” have populated the page, which highlights interesting facts about Coach’s product quality and brand history, such as how the inspiration for the first briefcase came from a baseball glove. Recent “Product of the Week” items have included the Exotic Slim Billfold in shocking blue alligator skin and the Bleecker Leather Electronic Cord Zip Pouch (because “Coach understands that guys can never have too many gadgets, and they all come with cords.”)

Duplantis said the brand also likes to share photos of fashionable male celebrities such as Sean Avery, Kellan Lutz and Penn Badgley from Coach Men’s events. In April, guest blogger Danny Chung of The Modman gave customers access to his “work to weekend” approach to fashion.

But in addition to feeding the customer with knowledge, men, as a gender, are fiercely brand loyal, and creators of digital media need to play to that, said Oliver Walsh, founder and chief executive officer of Wednesday London, a digital agency that has worked with Mr Porter, J. Crew, Alexander McQueen, Giorgio Armani and Moncler.

“You look at superstylish guys, and they often just wear the same thing every day. Most guys tend to have their uniform, because they’re very brand loyal and they know what fits them. They trust an online shop, and they’ve taken that risk and ordered that item, so they get site loyal, too,” Walsh said, “The initial barrier to men’s shopping is greater, but once you’ve converted them, they have a greater sense of loyalty.”

Walsh believes the men’s category is the future of social media and has been quite untapped until now.

“I think that the male psychology actually resonates better with the digital space than the female one. From a commercial perspective, a lot of guys don’t really like [brick-and-mortar] shopping,” Walsh said.

This was the mind-set when laying the infrastructure for Mr Porter, which Wednesday London helped build from concept to completion.

Even before the site launched in February, the social media minds behind the project managed to build buzz through a campaign that invited consumers to become a “founding member of Mr Porter,” allowing them access to benefits both pre- and post-launch. These members were then encouraged to share invitations to others through e-mail, Facebook and Twitter. The result: 70,000 founding members before Mr Porter actually made its official debut to the public.

In addition to the social platforms, this summer Mr Porter added to its site Instagram, a photo-sharing program, as well as YouTube, which has been popular for its “how-to” videos. To achieve maximum engagement with consumers, content is updated multiple times a day during the week — and now the weekend, after the site found that fans are interested in new posts and tweets on Saturdays and Sundays, too.

Mario Muttenthaler, Mr Porter’s head of sales and marketing, said the most popular features are new arrivals, either new products, designers or trends, as well as a weekly style clinic where personal shoppers talk to shoppers in real time on Twitter and Facebook. This week, content on the site includes an editorial with British actor Bill Nighy — whose obsession with navy blue suits served as the focal point of the shoot — and a look at the style of Oscar winner Gary Cooper, a “sartorial role model” for the e-tailer. The “Five Ways to Wear” feature showcases the blazer (Brioni, Bottega Veneta and Raf Simons among them) modeled by Damien Whitmore of Britain’s Victoria and Albert Museum, while new designer additions include Billy Reid and Anderson’s.

“With women, they know a little more what they’re looking for, and they want to make sure it’s the right fit,” Muttenthaler said. “Men really like to be inspired or told what to wear and how to wear it. A lot of guys like to learn about other ways to wear what they have.”

In August, the site launched its first-ever fall-winter wish list chosen by a female staffer — Claudia Plant, editor of Net-a-porter Magazine, and earlier this month, Mr Porter launched an edition that will be targeted exclusively to women seeking to buy for the men in their lives. This week, both sites engaged in a cross-promotion of sorts: Plant curated a list of 10 women’s items that was sent via e-mail to Mr Porter consumers, while Mr Porter editor in chief, Jeremy Langmead, selected 10 gifts for Net-a-porter shoppers that “the man in your life will love.”

“In the past, we have only had men providing wish lists on our social media channels [for Mr Porter], but with a sizeable portion of our Facebook fans, and the majority of our Twitter fans [53 percent], being women, we felt it was time to appeal to this demographic, too. Not only that, but men appreciate a woman’s point of view when it comes to style,” Muttenthaler said.

Gilt Groupe’s Gilt Man introduced GiltMANual in September 2010, while its full-price luxury counterpart, Park & Bond, also offers a variety of editorial content. According to the company, the former provides consumers with fashion news, style tips and a rolling guide to getting the most out of Gilt Man, while the latter offers authoritative advice and how-tos, profiles of stylish men of note and editorial features to inspire men to look their best.

This week, an oversize swatch of navy and white houndstooth-printed fabric with the headline “Know Your Terms: Houndstooth” is the anchor story on GiltMANual, linking to a full-length feature on the history of the pattern. There’s also “Gilt Man Essentials: 100 Things Every Guy Should Own,” which contains items such as “A Serious Pair of Wingtips,” “A Traditional Trench,” “The Pink Shirt” and “Chinos. That Actually Fit.” Additionally, there’s a “Cool Stuff to Buy” rubric that contains suggestions from that day’s sales on Gilt Man and “Link Love,” an Internet roundup of “the best in men’s style” — both of which are updated daily.

According to Chris Ventry, general manager of Gilt Man, they’ve seen success with multibrand sales that include head-to-toe looks and “how to wear it” hooks —  and the exact opposite holds true for women, where the single brand sale experience reigns at Gilt Groupe. He said the e-commerce platform has attempted to duplicate the “best of an in-store shopping experience” by devising sales around specific occasions or needs, such as a “summer wedding,” “date night” or “first interview.”

Men and women conduct online retail transactions quite differently, and much of that connects to how they shop in real life, he explained. The majority of male customers are focused on “goal driven” shopping — i.e., buying a bag for work or black pants for a formal event — while women make purchases based on emotional responses or as gifts.

“Women tend to take a more casual approach to buying, and drive many of our Ben Minkoff purchases. Because of this, we target both men and women for this collection. For men, focus is on the utility of the bag, providing a reason for purchase that’s sparked by how the purchase solves a problem or necessity,” Minkoff said.

There’s also a difference in the timing of purchases, Minkoff has found.

Women tend to be “lunchtime” shoppers and “full-time” talkers, commenting on the brand’s social profiles throughout the course of the day, while men tend to shop later in the day or on Mondays — when purchases they’re considering from the weekend are top of mind.

“Men are tactical about their purchases, while women tend to be philosophical. Women want to spend more time on a site, shopping and discovering premium original content about the brand. Men want to get to their purchases faster, so we’re planning to introduce online shops for men on our Facebook and mobile stores to get them to that Ben Minkoff purchase faster,” Minkoff said.