Brides’ Anne Fulenwider on the Nuances of the Bridal Market

In May, the title's new editor in chief talked up her redesign as a major overhaul, so it was surprising to see the next two covers looking like a confection. 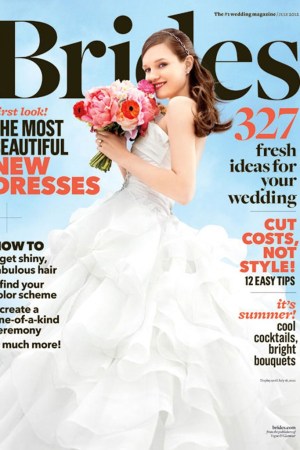 BRIDES TO BE: In May, Brides editor in chief Anne Fulenwider talked up her redesign of the magazine as a major overhaul. In her first issue, she dispensed with the Colgate smiles and gosh-wow enthusiasm of the Brides of old.

“This is not going to be your traditional bridal magazine — we’re going to blow it up,” she told WWD then.

This story first appeared in the July 10, 2012 issue of WWD. Subscribe Today.

So it was surprising then to see the June and July covers looking like a confection from Millie Martini Bratten, the former editor. The return of pastel colors and wedding cake dresses to the cover suggested this was the first of several 2012 redesigns — Condé Nast’s Glamour and Hearst’s Harper’s Bazaar were others — to backtrack on its refurbished look.

Not so, said Fulenwider. After a May cover that she called “a positioning moment,” she wanted to appeal to “mainstream brides.”

“I really wanted to make a lot of noise with our May cover,” she said on a recent Monday at her 4 Times Square office. “With June and July, I really wanted to let all the readers in. And not every reader of Brides is a fashion-forward bride.”

A magazine like hers is steeped in tradition and, sometimes, all the brides want is “to see a white dress on the cover,” Fuldenwider said. “That’s every bit of research I’ve seen since I got here.”

Big changes have to be introduced slowly, like medicine. The September issue will be another incremental step away from the old Brides.

The cover is still a white dress, with a beaming, irrepressible bride. But in the well, Fulenwider also has a photo spread on city hall weddings that even consists of ready-to-wear.

“This is our fashion issue,” she said. “We’re not making a big deal about it because we’re a bridal magazine but we’re doing a fashion issue. We’re doing really fashionable wedding dresses and we’re doing some nonbridal fashion. We’re not going to do it a ton but we’ll sneak some in there.”

Fulenwider came from Marie Claire and Vanity Fair, and she brought with her not just mementos from those jobs — in her office, there are Vanity Fair photo books and the Spy magazine anthology, a nod to Graydon Carter — but also a general-interest sensibility; she’s added beauty, style and news sections to the monthly. That balance between a new editor’s prerogatives and the magazine’s broad audience are some of the challenges Brides has under its new leadership, which includes former Lucky publisher Michelle Myers.

In addition, the new Brides has to electrify advertisers, who had been moving to the competition — supplements like Martha Stewart Weddings and New York Magazine Weddings — before Fulenwider and Myers came along. Though some advertisers have praised the redesign, they have not rushed to spend their ad dollars there. Through July, the magazine has 12 percent fewer ad pages over the same period last year, according to Media Industry Newsletter. The July issue was down 17 percent alone.

This is partially because marketers, especially in bridal, where there are many small businesses, continue to be selective about media buys.

For Mark Ingram Atelier, Brides’ redesign was a success, said spokeswoman Lindsay Mann. The company bought a two-page spread after a year and a half away.

But, “If it’s a smaller local retailer such as Mark Ingram, every dollar counts,” Mann said. “To get into a magazine that is going to be in newsstands longer makes our dollars go further.” For that reason, there’s been speculation that Brides might reduce frequency to every other month, but a spokeswoman for the magazine denied the rumor. Myers is on vacation and could not be reached for comment.

The Audit Bureau of Circulations will release its first stats of the year in August, so it’s not yet possible to gauge newsstand success.

Myers said she inherited a title that had been seesawing for years, and a turnaround will take some time.

She insists the magazine is in sound shape.

“I run an incredibly profitable and successful business at Brides,” she said, pointing out that the magazine last year had the most total ad pages of any other monthly, even Vogue. According to MIN, Brides had 2,602 pages in 2011. But Brides also had over 2,600 ad pages the year before, and Bratten and then-publisher Carolyn Kremins are no longer at the helm.

Fulenwider said she can only focus on the magazine and cranking out daily content for its Web site.

“The advertisers I’ve met personally have all loved the [May] issue, but the actual advertising business? That’s not my job,” she said.