Though it has long been a clich? to talk about an Internet revolution, in the fashion world, companies are still figuring out how to join it,... 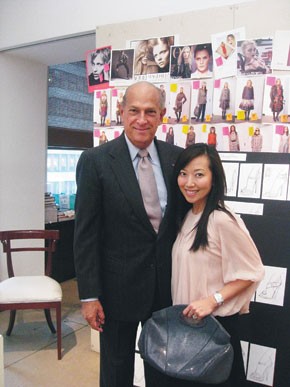 Though it has long been a cliché to talk about an Internet revolution, in the fashion world, companies are still figuring out how to join it, especially when it comes to online media.
Fashion houses first dipped their toe in the waters of the blogging world by granting credentials for bloggers to enter the tents at New York Fashion Week and, if they were lucky, standing room space at a few shows. Eventually, some of the more reputable — or aggressive — were granted seats.

Now, between the seemingly anarchic independent online venues and the ever-striving but sometimes anemic Web offerings of magazine companies, fashion brands and public-relations firms are starting to suss out places where the relationships can progress.

“All these things we’ve been hearing about for years are starting to come through,” said Alex Bolen, chief executive officer of Oscar de la Renta. “In the blogosphere, the wheat is being separated from the chaff. I would say that respected and trusted authorities are emerging.”

For de la Renta, that’s meant tentative but pioneering steps to collaborate with bloggers in a manner similar to the company’s relationships with the big media companies.

And while Internet-only venues are still experimenting themselves, some are becoming more like fashion magazines in other ways. Julie Fredrickson of Coutorture, who has made herself prominent in the debate, said she no longer considers Coutorture a blog, since it has begun steadily producing editorial shoots with models (mostly working for free) and samples called in from designers. They shot de la Renta and Isaac Mizrahi fall collections for online spreads that cost about $300 to $400 each to produce — not exactly Annie Leibovitz for Vogue, but significantly more investment than some might expect.

“I got tired of blogging in a lot of ways,” Fredrickson said. “A lot of people are focused on re-blogging stuff. It’s not actually media — it’s looking at photos and commenting on it. Fast, real-time shoots, sort of guerrilla fashion spreads, are the next revolution.”

In an industry built partly on exclusivity and limited access, participating in such projects is a gamble for these companies. “We as brand managers spend a lot of time trying to protect and control our environment,” conceded Bolen. “There is a certain giving up of control once things go out on the Internet….[But] my feeling is that it will happen anyway, so I’d rather be involved.”

Deciding where to focus that involvement has become easier now that there are known quantities of online fashion writers among the countless bloggers out there — even if they aren’t commercial ventures on the scale of a major fashion title. “There’s a weeding-out period,” said Lesley Scott, editor in chief of Fashion Tribes, adding, “There are higher standards now. It’s not enough to have a blog. You have to earn your readership on a weekly and daily basis.”

Of course, some companies remain uninterested in dealing with bloggers. “The biggest resistance I feel is from brands that don’t want overexposure — the very elite, very high-fashion brands that are concerned with oversaturation in the market,” said Susan Cernek, fashion and beauty director of the blog network Glam.com.

Still, the targeting possibilities online are significant. As persistent job cuts and readership declines continue to afflict the newspaper industry, local bloggers become a way to fill the vacuum for brands looking to make a dent in that particular region. “There are fashion bloggers in a lot of major markets where the local offline press does not have a style section. In those places, targeting local fashion bloggers helps build that buzz in small but major markets,” Cernek said.

Hamilton South, partner at HL Group, recalled seeing such a phenomenon in action with Tina Craig of the blog Bag Snob at a Valextra event in Dallas, an experience that countered any supposition that fashion blogs’ readers are kids who can’t afford to buy. “These were very serious grown-up female consumers,” South recalled. “Many were middle aged, very affluent, and [Craig] was the voice of authority.”

And contrary to the image of the blogger setting up shop to reap freebies, Craig at least said she buys all of her own bags and sends back bags sent to her from p.r. firms to retain her objectivity, unless they’re to be used for giveaway contests on the site.

Craig and her business partner, Kelly Cook, have leveraged their audience of 200,000 uniques and 500,000 page views per month — and their previous experiences in the fashion and entertainment industries — to forge closer contacts with brands. At de la Renta, for instance, Craig visited the showroom and what she referred to as “Oscar’s inner sanctum.”

“I got more out of him in that hour than in any of my years in the fashion industry,” she raved. The Web site and the fashion house cohosted an event in Dallas and at the Melrose Oscar de la Renta stores.

“That was a culmination of two years on our part to show that we’re professionals,” she said. “We’re working to change the way consumers and manufacturers interact.”

She pointed to one de la Renta fall handbag, the Goya, which drew tremendous interest after being featured on Bag Snob. “The projected price was $11,000. After we featured it, there was such a huge response and so many people were calling, they dropped it to $4,750.”

(Bolen had a slightly different take, however. “What would be fair to say is that the demand that came exclusively from Bag Snob readers had us rethink our projections and production assumptions for that bag. Whether that had a price impact, I think that might be a bit of a stretch.”)

“We are not deluded in thinking our blogs will ever replace Vogue or Allure, but we think we strive to be a strong supplement to them and fill a niche that we feel is missing,” Craig told WWD.

As fashion brands experiment with online advertising and their own e-commerce and content sites, their editorial collaborations with online venues are helping them figure out what to do. But the ground is still shifting, both for them and for the bloggers, who are suddenly getting calls and e-mails returned they might never have gotten before. “The old way of doing things was very set in stone,” said Scott. “We’re all making it up. We all can have a hand in making it a good, healthy thing, or making it adversarial.”

Witness Gucci’s experience in trying to marshal fashion bloggers for its microsite to celebrate the opening of the company’s Manhattan flagship during New York Fashion Week, following a similar effort by Chanel, which in September flew a group of bloggers from around the world to Paris to promote its Coco Mademoiselle fragrance.

Gucci flew in bloggers from places like London and Japan, all expenses paid, and asked some to blog about their favorite New York experiences. Fashion Indie blogger Daniel Saynt complained on his blog, to broad pickup around the Web, that actual New York-based bloggers had been shafted, and he later received an invite to the brand’s lavish party at the United Nations. (A spokeswoman for Gucci said New York bloggers had always been invited, but that not all were able to attend.)

There, Saynt chatted and took photos with creative director Frida Giannini, and the company also had a bloggers-only tour of the store hosted by chief executive Mark Lee. “Can’t hate on Gucci anymore,” Saynt wrote on his blog. “Good job Gucci on keeping tabs on us rogue publishers. It’s the wild, wild West on the Web and it seems you’ve figured out ways to keep us outlaws happy.”

Inevitably, the more access independent online fashion media gets, the more liable it is to fall under the pressures of traditional fashion media: advertisers counting editorial credits, and write-ups glossing over certain things for the sake of relationships. Bloggers are still wrestling with the question.

“I’ll be brutally honest and say that when Gucci first approached me about participating in this trip and attending the event…I had to question whether me posting about Gucci, a brand that I have never shown great love for, would be blog-ethical,” wrote Susie Bubble of Style Bubble in London. “The way I did approach it is to perhaps try and see if I would personally have a change of opinion, whilst taking in a trip on behalf of the blog.”

But like print magazines, many bloggers believe they’ll be able to maintain their editorial integrity. Craig noted that even when her site is tough on bags from Louis Vuitton or those on offer at eLuxury — a site with which it partners — the posts are still referring readers and buyers to those sites. “They all realize that being talked about is good, even when it’s not so positive,” she said.