Sophia Neophitou-Apostolou talks about power of print, and the supporting role digital can play. 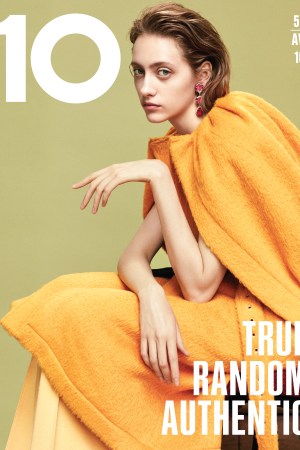 PAPER CHASE: Sophia Neophitou-Apostolou, founder editor of the London-based indie fashion magazine 10 and 10 Men, is unveiling her biggest issues this Friday, and believes nothing can beat print — even as she prepares to launch e-commerce, and generate more video for the web site.

Neophitou-Apostolou, the glamorous Azzedine Alaïa-clad stylist who is serving as creative director at Antonio Berardi and Roland Mouret, and is collection creative director for Victoria’s Secret, founded 10 in 2001, and took it from quarterly to biannual more than a year ago. The London native, whose roots are in Greece, has the heart and brain of an entrepreneur, and her latest challenge is knitting together her beloved print with online — in a personal way.

She has made some major changes starting with fall/winter issue, which hit newsstands later this week. The women’s one has three covers, with models dressed respectively in Chanel, Dsquared2 and Céline. The men’s has two, with the model wearing Dsquared2 and Dior Homme.

The women’s issue comes in at 466 pages, 76 of which are ads, while the men’s is 418 pages, with 56 ads. Advertisers in both include Louis Vuitton, Dior, Chanel, Gucci, Miu Miu, Céline, Giorgio Armani, Kenzo and Calvin Klein. Prada has taken the back cover of both issues. The title does not disclose circulation figures, and is not audited.

There are new varieties of paper stock; art portfolios in both issues, shot by Niall O’Brien and Matt Lambert, and illustrations in 10 Men by Charles Jeffrey. Even as fashion web sites, online magazines and blogs proliferate and the cost of print rockets, Neophitou-Apostolou said she’ll never give up on the “physical experience” of print — and neither will her advertisers.

“The smell of the paper, the feel of it, the weight of it, this is something that cannot be replicated in a digital format. We have found that even advertisers are reverting back to print more and more, after finding that the majority of qualitative consumers could not be quantified across the digital platforms,” Neophitou-Apostolou said in an interview with WWD.

There are other reasons, too: “Being a style title is a great place to be in print media right now, as our publications aren’t as time specific as some print media, but beautiful books of imagery that you want to have and keep and look back on, and treasure. I am still in love, still head over heels with all the creativity that was born out of every issue.”

She said the issues’ size came partly from consolidating the number of annual editions from four to two; from the news that’s come out of the season, driven in particular by Demna Gvasalia, Alessandro Michele and Jonathan Anderson, and from a desire to keep all the creativity flowing.

The art portfolio idea came from the desire, she said, to stretch beyond fashion and take her readers into a new world. For 10, O’Brien shot lonely, bleak images of Havana just as Karl Lagerfeld and the Chanel team were arriving for their landmark cruise show. For 10 Men, the American filmmaker and photographer Matt Lambert shot sensual portraits of young male actors in Berlin.

The art portfolio images will be available to purchase as limited-edition prints on the magazine’s e-commerce platform, 10curates.com, when it launches later this year. Neophitou-Apostolou called that project “an editorial one-cart shop-able environment” that will give her global online audience that chance to tap into her world and buy the objects she loves, with everything available immediately.

In addition to her picks, she said the magazine has sourced artists in Cuba, the U.S., England and across Europe, as well as illustrators who will create original work for the shop. The site will also sell jewelry, first-edition prose and poetry books, mid-century furniture and photography.

For Neophitou-Apostolou digital isn’t just about e-commerce. She’s a Snapchat devotee and also asks all of her contributors to create behind-the-scenes films to accompany their stories. “It’s a real opportunity for people to see more of what has gone in to making these shoots, and in the age of Snapchat and Instagram, getting ‘behind the scenes’ has become ever more important,” she said.

The future, she said, is about even more unique video content. The magazine worked on a video project with the label MSGM to launch its pre-fall collection, and she said she wants to do similar work going forward.

“All of these combined platforms still represent a drip feed of our world until the mother lode hits in the form of the magazine. These new branches of our world only enhance the final experience.”