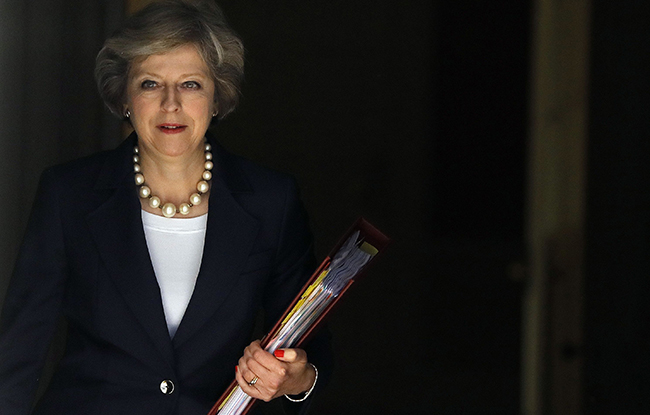 THERESA TALK: British Prime Minister Theresa May is slated to appear in American Vogue. “She has done some photos with Vogue that will appear in April,” said a spokesman for 10 Downing Street on Monday.

For the magazine the style-consious politician was photographed by Annie Leibovitz at Chequers, the prime minister’s country house in Buckinghamshire, England.

British media had reported that May will be featured on the cover of American Vogue, but Downing Street could not confirm whether or not that is the case. If so, it would mark the first time a prime minister graced the cover of the publication. (Previously, images of Margaret Thatcher had appeared inside British Vogue.)

A Vogue spokesperson could not be reached at press time.

An avid reader of the American publication, May said in 2014 on BBC’s radio program “Desert Island Discs” that if she were a castaway, her one luxury would be a lifetime subscription to Vogue.

Last December, May’s fashion sense came under fire as former Prime Minister David Cameron’s education secretary Nicky Morgan accused May of an extravagant purchase: a pair of Amanda Wakeley leather trousers. May wore them at home during a recent shoot for The Sunday Times of London for which she teamed the 995 pound, or $1,250 at current exchange, flared pants with a pair of black-and-white Burberry sneakers and a dark, draped sweater. More recently, she wore the trousers to work at 10 Downing Street.