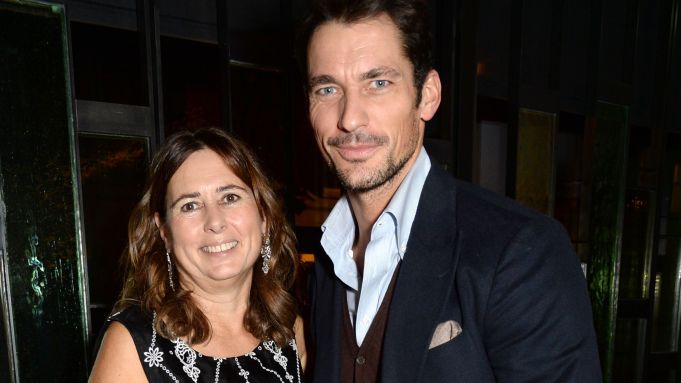 SOME YEAR: “Everyone has been seeing and hearing a lot of me this year, especially looking grumpy in the back of a car,” said British Vogue editor Alexandra Shulman at a party in London to launch her latest book, “Inside Vogue: A Diary of My 100th Year.”

Shulman was referring to scenes from a two-part, fly-on-the-wall BBC documentary that aired last month. It showed Vogue staffers coping – for better and for worse – with all the ups and downs of the magazine’s 100th year. The documentary also garnered much attention in the British media, due to suggestions of a conflict between Shulman and Anna Wintour over a Rihanna cover.

Shulman said that she wanted the diary to have a sense of humor – and reality – as well as chronicle her personal experiences over the 12 months.

“I wanted it to be a mixture of the wonder and the glamour and the extraordinary-ness of Vogue and fashion, but also the reality of my life – or everyone’s life – in a way,” said the author, who wrote about things not going her way; feeling under pressure; and having a glass of wine too many.

The book is utterly polite and discreet – with no dishing of dirt. After all, Shulman is still doing her job at Vogue, and coming off a year that’s generated much goodwill for the magazine.

She does poke fun at herself, describing her worry that any and all of the 100th anniversary plans will implode, and scoffing two croissants in frustration after Alber Elbaz cancels a Paris appointment (due to an anti-Uber strike).

She also daydreams about letting her hair go gray, making soup at home, and running in the park instead of sitting in fashion’s front-row. Stay-at-home life, however, isn’t all vegetables and roses: Shulman writes with regularity about the broken-down boiler at her London home and her ongoing quest to have it fixed.

She’s gracious about her colleagues at the magazine, and the Duchess of Cambridge, whom she convinced to appear on the cover of Vogue’s 100th anniversary issue, and writes much about her beloved son Sam. (She’s wracked with guilt about potentially having to lie to him about her whereabouts during the top-secret shoot of the duchess in Norfolk, England.)

During the party, which took place at Italian restaurant Fucina in London’s Marylebone, Shulman said that preparing the June centenary issue was one of her favourite parts of the year. “We’ve had a lot going on, from the centenary issue, to the exhibition at the beautiful National Portrait Gallery and the documentary – which may or may have not been a success,” she said.

The diary also includes descriptions of the 100th anniversary party and annual consumer-facing Vogue Festival in Hyde Park, and also a few justified moans about the fashion system – overloaded with merchandise, show seasons that go on for too long, and a proliferation of cloned stores around the world.

It wraps with Shulman watching the European Union referendum results with Sam and his friend – vodka and tonic in hand – hoping “the ghastly Brexit isn’t going to happen.” That wish didn’t come true.

Shulman, the author of two novels, said she plans to write another book, but has yet to decide whether she will return to fiction, or keep it more personal.

“Writing a diary is actually much easier than writing fiction. With fiction you have to make something up. All I had to do was write what happened the day before: I’d write down what happened, what I thought, and then go back and refine it a bit,” she said.

She admitted that she hasn’t kept up the diary writing, “but it’s a very therapeutic thing to do and I miss it, so as of tomorrow I will start writing again.” As for any more glimpses behind-the-scenes, Shulman said there is nothing left to reveal: “It’s all out now.”