The June issue will come packaged with the new title. 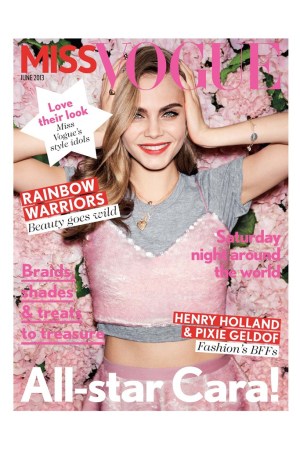 LONDON — When the June 2013 of Vogue hits newsstands on Monday, it will be sold with a little sister — the first issue of Miss Vogue.

It has been inspired by Teen Vogue, said British Vogue editor Alexandra Shulman, who acted as editor-in-chief of the Miss Vogue issue and who hopes that this new title will not only be enjoyed by Vogue readers but also attract some new readers to the main magazine. “I admire Teen Vogue and it certainly was an inspiration but I felt Miss Vogue needed a different feeling for the UK; It’s got a more British sensibility, I think, than Teen Vogue,” she told WWD.

“I had been thinking of [publishing Miss Vogue] for some time and had asked Stephen Quinn [Vogue’s publishing director] if we could do it a few years ago. But he was unkeen at that point,” Shulman told WWD. “We are doing it to see whether people like it and then we will decide what to do. It was an exciting different thing for the Vogue team to work on.”

Miss Vogue was edited by Emily Sheffield, Vogue’s deputy editor, and Jamie Perlman acted as creative director. Cara Delevigne is on the cover and, inside, features stretch from playful shopping pages and a look at “fashion-savvy” intern style, to an interview with “Homeland” star Morgan Saylor and a feature from Tavi Gevinson on wearing a crown.

For this issue, new advertisers include Miss Selfridge, Forever 21, Bershka, Superdry and Accessorize, and they were charged 15,000 pounds (about $22,700 at current exchange) for a double page spread and 7,750 pounds ($11,700) for a page. Fixed premium positions cost 10 percent extra. The back cover spot is taken by Dior Addict gloss, the inside back is occupied by River Island, while the inside front cover is two Topshop double page spreads. Quinn confirmed that the magazine has made a profit.

“I decided firmly against a sponsor because we wanted brand advertising to add to the color and fun of the overall content,” said Quinn. “We have 35 ad pages within a 116-page magazine and the ads make the package seem bigger, youthful and fun to look at. The reaction of advertisers was favorable, as we were securing a safe UK circulation by sending it to the market attached to June Vogue. It was not a hard sell because we adjusted the ad rates at 60 percent of the main book rates.”

Both Quinn and Shulman denied targeting the Grazia and Glamour reader, saying that they are instead hoping to engage a younger Vogue audience. Quinn said the title is “an opportunity for us to talk directly to young women who are already passionate about Vogue, and to produce content for them that is specifically targeted at a younger audience who love experimenting with fashion and beauty. We have a 300,000 readership amongst 15/24 year old women (total readership 1.3m) for British Vogue. We simply want a percentage of those to buy the magazine at UK newsstands.”

Both Vogue and Miss Vogue will be available in print and on the iPad and there are currently no plans to launch the new magazine as a stand-alone title.