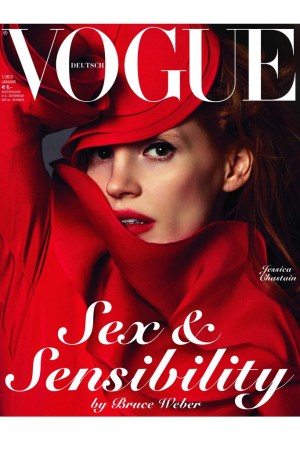 Among the others who appear in the issue are an evocatively yet (for the most part) fully dressed Kate Upton, New York sculptor Rachel Feinstein, and screen stars Jessica Chastain and Omar Sy for a moody touch of jazz. Not to mention Weber himself, photographed by Ralph Mecke along with documentary film maker Albert Maysles for the magazine’s monthly “Vogue-Gespräch” or Vogue Talk.

Weber and his art director Sam Shahid were also given the run of the rest of the magazine, which took on a cleaner and more graphic look throughout the January issue’s 220 pages.