The centerpiece of the article is a lengthy interview with Fabrice Thomas, one of the couturier’s former employees and love interests. 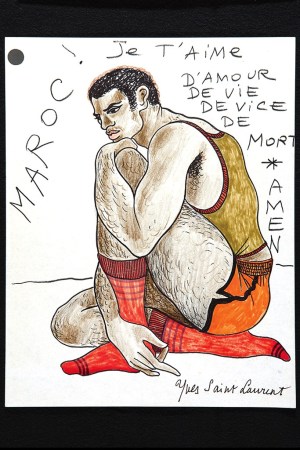 BUILDING A MYSTERY: Vanity Fair France’s second issue, which hit Paris newsstands on Wednesday, devotes 12 pages to the mysterious cache of drawings by the late Yves Saint Laurent, first reported on by WWD in October 2012. The centerpiece of the article is a lengthy interview with Fabrice Thomas, one of the couturier’s former employees and love interests. He insists he received the 390 sketches as gifts, fending off accusations from Saint Laurent’s business partner Pierre Bergé, who lodged a police complaint, that they were stolen.

Now 52 and living near Montreal, Thomas posed for a portrait and said he is sanguine in the face of an inquiry by the Paris prosecutor’s office, which in May summoned him to give testimony. (The hearing is not open the public.) “Why should I worry? I can explain everything,” he told journalist Olivier Bouchara. “I am not a thief. And for Saint Laurent, I was much more than a chauffeur.”

Bergé declined all comment, at the behest of the prosecutor.

The article names Lothar Gallinat as the German gentleman who assisted Thomas in his difficult post-YSL years, when he fled to Tourrettes-sur-Loup and opened an antique shop and watch atelier. “He took care of me like a brother,” Thomas said, describing a rescue from alcoholism and suicidal tendencies. “That’s why I gave him my drawings. In 1994.”

Gallinat declined to give his version of events, leaving the ownership question for the courts to unravel. Meanwhile, Ludwig Geiger, a Swiss-based representative for Gallinat, claims that a London gallery has offered 250,000 pounds, or $385,000, to exhibit the drawings.

For his part, Thomas said he plans to write a book about his life, and perhaps even a biopic, which would join two already in the works about Saint Laurent.