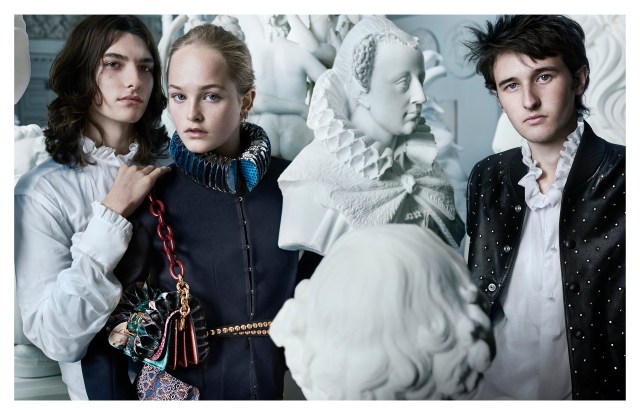 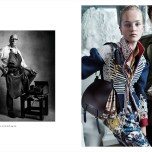 LONDON — Burberry is planning a trip through time for its first straight-to-consumer collection and ad campaign, both of which were inspired by Virginia Woolf’s historical, gender-bending novel “Orlando.”

Details are expected from the company today.

Mario Testino shot the images, which will be released on Sept. 19, after Burberry’s evening show, which will take place at a new venue in London’s Soho, dubbed Makers House, by the brand.

This season, Burberry is collaborating with The New Craftsmen, a British brand that promotes the work of “makers” — ceramicists; potters; leather, textile and jewelry designers; woodworkers; silversmiths, and illustrators.

Makers House will be open to visitors from Sept. 21 to 27, and will showcase original works by the makers, who will use the space to experiment and create, using Burberry’s collection as their starting point, the company said.

The ad campaign features models Jean Campbell and Alex Dragulele, and the musician Cavan McCarthy from the band Swim Deep. All are wearing looks from the collection, inspired by various historical periods.

There are more than a few ruffle-edged shirts and ruffs — including an abstracted one on a chain-handle shoulder bag and a python collar. One jacket from the campaign features silvery military braiding, while colored prints and patterns pop across clothing and accessories.

Shot inside the sculpture area of Liverpool’s Walker Art Gallery, the campaign also shows a series of portraits of Burberry artisans from mills and factories across England, Scotland and Italy.

The Walker Art Gallery houses one of Britain’s best collections of Victorian and Pre-Raphaelite art as well as more recent paintings by David Hockney, Lucian Freud and Bridget Riley.

As part of the campaign launch, Burberry has revealed a portrait of Piero Calosi, the patternmaker of the brand’s newest bag, The Bridle, for men and women. It’s inspired by classic British equestrian designs and Burberry’s outdoor heritage, the company said.

The partnership with The New Craftsmen will launch on the night of the Burberry show, and see the makers take part in a daily changing program of activities and installations at the brand’s show venue, at No. 1 Manette Street.

Christopher Bailey, chief creative and chief executive officer, said the campaign and the collection both mirror “Orlando,” and the campaign also attempts to honor “the many skilled craftspeople” who work on Burberry’s products.

“Just as Virginia Woolf’s “Orlando” is both a love letter to the past and a work of profound modernity, this week-long exhibition aims to nod both to the design heritage that is so integral to Burberry’s identity, and to some of Britain’s most exciting creators, and the innovation and inspiration behind their work,” Bailey said.

The change of showtime from the early afternoon to 7:30 p.m., and venue to Soho from a marquee in Hyde Park, is the latest in a series of Burberry transformations this season.

As reported, women’s and men’s in-season collections will be presented together, for the first time, at the brand’s inaugural straight-to-consumer show.

The campaign will be previewed in print publications including Vogue, Vanity Fair, GQ, Harper’s Bazaar, Elle, Surface and online starting this month.

It will run from Sept. 19 until Feb. 2017 across outdoor and print advertising, as well as on all social platforms and the brand’s web site.

As reported, in September the company will unveil a consumer app aimed at making the check-out process smoother, and also plans to re-launch Burberry.com in the autumn.

There are more digital changes to come as the brand seeks to streamline its business and merchandise offer and appeal to a younger generation of shoppers.