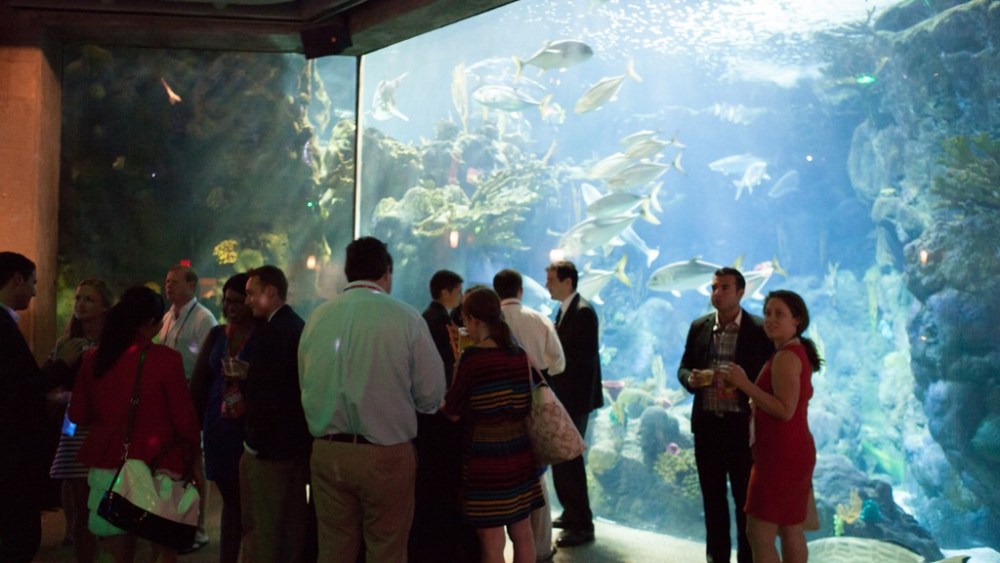 WHERE’S THE BUZZ? At Buzzfeed’s party at the Republican National Convention, held Wednesday at the Florida Aquarium, Jill Abramson, Howard Fineman, and Maureen Dowd,  in that order, sat sullen-faced at a round table facing the shark tank, scanning the crowd for any funny business.

“Party Animals,” as the party was promoted, was supposed to be Buzzfeed’s homecoming as a political media player, and an oasis of fun in Squaresville, Florida.

Abramson, for the second time during this convention, politely waved off a reporter. Like all good school dances, Buzzfeed’s party needed chaperones, and the role this time had fallen to these three.

Buzzfeed used to be where one went for cute animal listicles and pop culture randomness. “I don’t know how anyone could look at our site and not fall in love with a corgi. Like, are you human?” said Matt Stopera, a tousled-hair editor at the site and its most animated employee.

In January, Buzzfeed hired Politico’s Ben Smith to build a journalistic outfit that would also cover politics. Throughout the campaign, it’s emulated the old guard — it’s sending a team of ten reporters to each convention, for instance — but retrofitted their coverage for maximum tweetability, resulting in high-concept stories that can be summed up in one sentence — “Ashley Ryan is the new face of the Ron Paul revolution” and Stopera’s Fab or Drab fashion gallery.

The site, somehow, has its ear to Twitter’s dog whistle.

“They’re also hearing things that those of us in the mainstream don’t think of as quickly,” said Roberts. “There’s a sort of granular-level coverage of things we really don’t have the resources to apply that intense of focus to.”

And it’s just easy to read.

“I’m skimming constantly, as you understand. They make it easy to skim,” said Unger, who was also in Tampa promoting his book, “Boss Rove.” And it’s not like they’re just any aggregator.

“The truth of the matter is that when you’re on the Internet, it’s much harder to have the kind of distinctiveness that you can with a magazine or a publication,” Unger said. “Does Buzzfeed blend in? It has a certain identity. I know who Ben Smith is. It has more credibility than most.”

Plus, they have money spend, unlike at NBC. “We’re going to spend our money on employees,” Todd said. If Buzzfeed’s evolution stays on the right track, they won’t even have to spend as much in four years. There’ll be some other outfit throwing parties at aquariums and they’ll just have to do the occasional panel.

On Thursday, Buzzfeed reported Tumblr, the micro-blogging site, sent three editors and six correspondents to cover Tampa. A Tumblr editor said more traditional coverage in the future was a possibility.