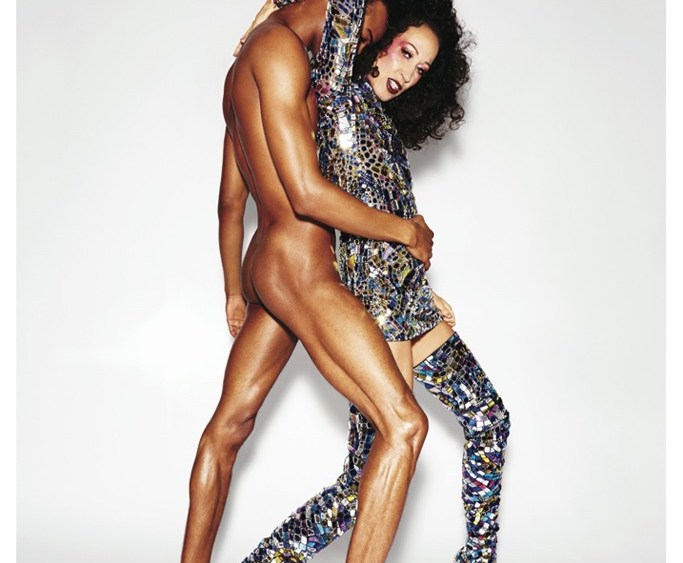 CALLING MR. MIDAS: André Leon Talley has teamed with Tom Ford, the man whom he calls “Mr. Midas” for his many talents, on a “boundary-crashing” March issue of Numéro Russia that hits newsstands Friday.

Ford photographed Pat Cleveland and South African model Conrad Bromfield for the cover and for a fashion story that runs over 14 pages and shows the two models larking around in looks from Ford’s spring women’s collection.

Not surprisingly considering the snapper, there’s quite a bit of flesh and rippling musculature on display (mostly Bromfield’s), so the issue has been poly-bagged to suit the Russian newsstands.

The title is distributed internationally, with 350 posters of the cover plastered around Paris, and 100 in Milan to mark the launch.

Talley, Numéro Russia’s international editor at large, calls the title his “creative playpen,” where he can execute ideas that wouldn’t fly in an established American fashion magazine. “There are two people of color on the cover looking provocative and elegant,” said Talley. “And Pat must be 60 now, proving that fashion is not about age. It crashes through the boundaries of ageism.” He added that the shot of Bromfield wearing one of Ford’s cropped white fur coats — and nothing else — broke through a cross-dressing boundary, too.

In a separate interview, Ford said he never really thought about breaking anything when he shot the story.

“I am happy to say that I am color blind, and I simply cast the two people that I most wanted to work with and who I find beautiful. Pat Cleveland is iconic, yet she is still completely current as a model. Her age is irrelevant because her aura and what she is able to bring to a shoot and project to the camera is ageless and timeless.

“I photographed Conrad with her in somewhat sexual poses, and the two of them as a couple do not look remotely ridiculous together, despite their age difference. They look absolutely right and completely plausible because Pat is forever young in her mind — and I must say her body as well,” he said.

Ford added that he had always wanted to work with Cleveland, as the images of her from the Seventies were a part of the glamour of the era that made him want to become a fashion designer. He also said her work ethic is fierce.

“She is like a tornado. Her positive energy is unstoppable.…I had to actually take breaks just to catch my breath and to calm down. I don’t do drugs any longer, but working with her made me completely high. My camera even kept jamming as even the shutter could not keep up with her speed in striking poses,” Ford said.

Talley also did a Q&A with Ford that appears in Russian and in English and runs over six pages. The designer talks about wanting to make more movies, have more children — his son Jack is one year old — and launch home and underwear collections in addition to building up his women’s offer.

Ford said fashion today is lacking in people like Talley. “He has so much enthusiasm for fashion that it is absolutely contagious. We have all lost that a bit in this industry, as the pressures of the global business that fashion has become have taken over,” he said. “He is…one of the last of the great fashion editors.”

There’s more to come: Talley’s first fashion shoot as artistic director for Zappos Couture has recently been published, and Talley’s agent, Marc Beckman of DMA United, said he is in talks with a variety of luxury brands in various sectors about future creative director roles for his client.