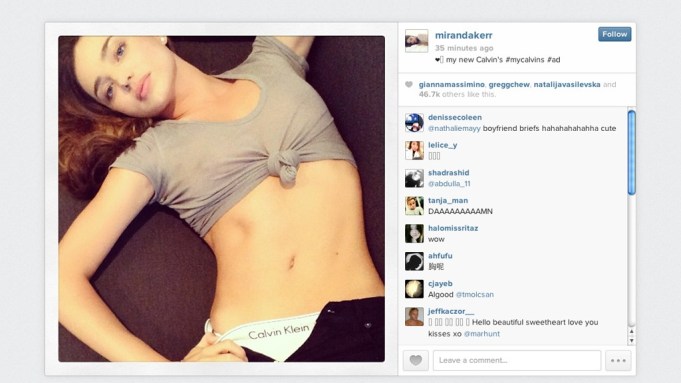 NEW YORK — Calvin Klein’s latest campaign is a nod to its underwear with the classic “Calvin Klein” logo waistband that amassed cult popularity in the Eighties and Nineties.

The multitiered digital program “show yours. #mycalvins” was teased on social media Monday via the Instagram accounts of Miranda Kerr and Trey Songz, who each published posts with their take on #mycalvins to their 3.3 million and 1.9 million fans, respectively. Immediately after posting, the likes started accumulating on the pages. Songz had more than 116,000 likes in two hours, and Kerr had nearly 40,000 in the first half hour.

Today, leading bloggers Chiara Ferragni of The Blonde Salad and Leandra Medine of the Man Repeller will break the campaign on Instagram, publishing their points of view on the Calvin waistband. The brand will also promote the dedicated hashtag across all its social media properties.

More than 100 influencers from 15 countries with a combined reach of more than 250 million fans on social media were tapped by the brand, including actors, bloggers, models and musicians. They include Fergie, Lara Stone, Cody Simpson, Poppy Delevingne and Hanneli Mustaparta.

“We thought it would be groundbreaking to actually start a campaign with influencers posting images before we even posted images,” said Malcolm Carfrae, Calvin Klein executive vice president and chief communications officer, emphasizing the brand’s efforts to use this initiative to maximize earned social media versus owned media. “Basically, the front end of this entire campaign is public relations-driven and our feeding product to VIPs and having them post from their social media platforms before we do.”

According to Carfrae, Ferragni is one of Calvin Klein’s leading social media voices. One of the blogger’s posts about the fall collection garnered 60,000 likes and comments. Ferragni has posted about the fall show five times, and these posts have surpassed 250,000 fan interactions to date.

“We wanted global representation, and the two of them [Ferragni and Medine] have very consistent global followings. Chiara is based in Italy, but she’s truly global. She also has a very intimate and romantic sense of style,” Carfrae said. “Leandra, on the other hand, is more ironic; there’s always something tongue-in-cheek. They are from two entirely different sides of the spectrum in terms of bloggers.”

The brand is urging participating influencers to make their #mycalvins posts “whatever they want to be.”

“We’re sending product to them, and we’re waiting to see how they interpret it. They will post it and we will repost it,” Carfrae said.

Led by the above, Calvin Klein intends for a hub on mycalvins.calvin.klein.com to serve as a user-generated content destination. The brand will work with Olapic to ensure that the hub is e-commerce enabled and consumers can shop the aggregated content in both user and influencer images.

This week, Calvin Klein will unveil an outdoor advertising campaign to support the program, followed by in-book and online advertising during the course of the project.