Shot by Willy Vanderperre, the campaign features a cast of 22 models. 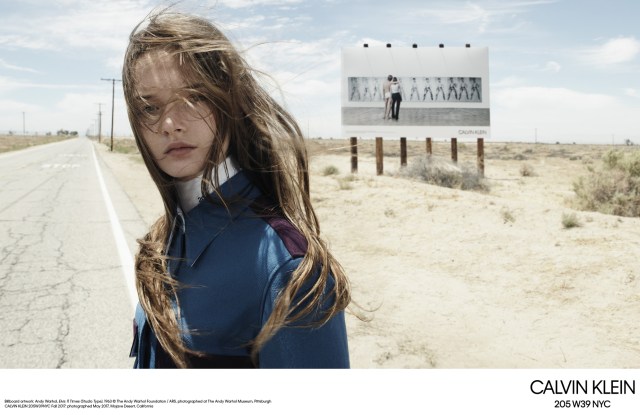 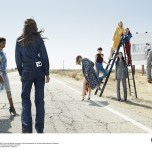 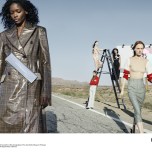 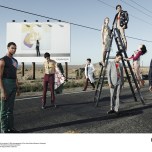 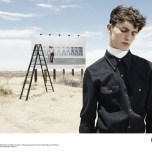 Shot by photographer Willy Vanderperre, the campaign marks the launch of the collection by chief creative officer Raf Simons.

The ads feature a cast of 22 models shot against a series of billboards that highlight images from last season’s Calvin Klein: American Classics campaign. The billboards of the previous campaign, which include works by artist Andy Warhol, were erected in the California desert in the days leading up to the shoot. But the images aren’t meant to simply sell clothes — they have a much higher purpose, which the company indicated is to show the juxtaposition between “art and artifice, the real and imagined, the mannered world of high fashion combined with a sense of the everyday.” Ultimately, the ads explore the cinematic and romantic outsider’s view of America, something of a dream world that has become concrete for chief creative officer Raf Simons and creative director Pieter Mulier.”

The media strategy calls for over 850 million impressions planned across 22 global markets with an integrated media mix.. The campaign will run in fashion and lifestyle publications around the world during September. It will also come to life in large format and high impact outdoor venues in key locations such as New York, Paris, Brussels, China, South Korea and Hong Kong.

The fall 209 West 39 NYC collection featured in the campaign highlights a mix of marching band uniforms, plastic coated protection, power broker tailoring, antique handcrafted quilting, workwear and westernwear. In addition, the collection introduces another new line, Calvin Klein Jeans Established 1978, a designer denim brand that will be housed under the Calvin Klein 205 West 39 NYC business. The pieces are emblazoned with an exclusive patch that features a silhouette inspired by the iconic Richard Avedon image shot of actress Brook Shields for Calvin Klein Jeans in 1981.