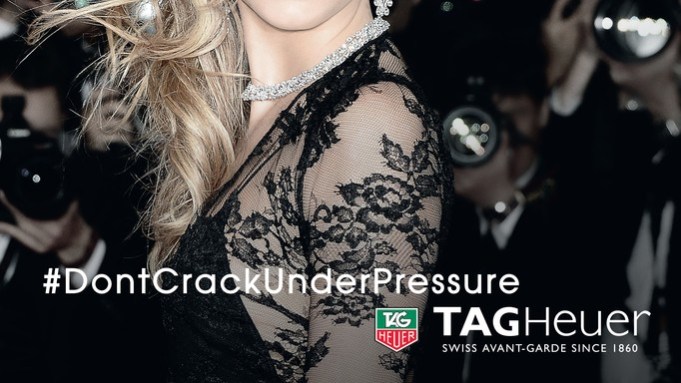 STAGEFRIGHT: Cara Delevingne was supposed to be joined by a lion at the event in Paris revealing her as the new face of Tag Heuer, but the big cat apparently did not share her love of the limelight: He refused to exit the backstage area.

Not to worry: There were plenty of photo ops later as Delevingne emerged with an adorable lion cub, Bobby, in her arms. It clawed at her and licked her face as photographers snapped away.

The surprise choice of Delevingne as Tag Heuer’s new brand ambassador breaks with its recent tradition of working with celebrities from the film and sports worlds, such as Leonardo DiCaprio, Cameron Diaz, Lewis Hamilton and Maria Sharapova.

It reflects the recent shakeup at the Swiss luxury watch brand, following the appointment last month of Jean-Claude Biver as chief executive officer.

Tag Heuer, which recently revived its tag line “Don’t Crack Under Pressure,” is targeting a younger customer with Delevingne, who comes with a huge media profile and social media presence.

Biver hopes that what he described as a “disruptive” change in image will help the brand recruit young women and build its women’s business, which currently accounts for 35 percent of sales.

“In the medium term, we would like to approach half and half,” explained Biver, adding that the relationship with Delevingne is intended to go on for three to five years.

The event itself, held during men’s fashion week, was certainly disruptive: Aside from the no-show from the grumpy lion — he was just glimpsed in the wings at one point — Delevingne’s speech was peppered with expletives as Bobby dug in his claws while she fed him from a baby’s bottle.

“Thank God that is not a nipple,” she exclaimed, joking that she had only accepted the job because she would get to work with lions for the first time. “There’s something about cats that I’ve always been drawn to, they’re always spontaneous,” said Delevingne, whose star sign is Leo.

The two ad visuals unveiled on Friday mirror the ubiquitous paparazzi shots of the irreverent British model and reflect the two facets of her personality. One shows her glammed-up in diamond jewelry on the red carpet, while the other features her scowling while showing off the lion tattoo on her index finger.

Biver, who is also president of the watches division at LVMH Moët Hennessy Louis Vuitton, said Delevingne reflected the spirit of Tag Heuer with her willingness to challenge conventions and her ability to perform under pressure.

“We needed someone disruptive yet elegant like Cara to open our minds to the brashness and boldness of today’s youth. Tag Heuer has set its sights on ‘It-ness,’ and Cara is just the person to help us get there,” he said.

Delevingne said recently she is ready to put her modeling career on the back burner to focus on acting. But with new ads for Yves Saint Laurent Beauté, John Hardy jewelry and now Tag Heuer unveiled in the last week alone, she shows no sign of slowing down.