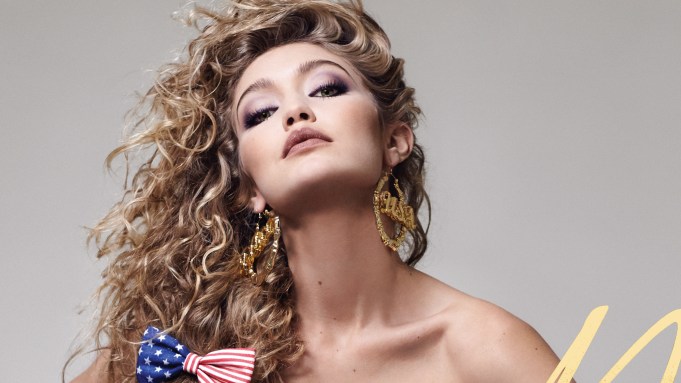 Carine Roitfeld’s CR Fashion Book will debut its eighth issue with its interpretation of Americana.

“Each of them brings something very special to fashion: Gigi with her beauty and personality; Staz with her bohemian spirit and talent as an actress and musician; Kayla with her fierce, confident attitude, and Bentley with her innocence,” Roitfeld told WWD.

The CR founder and editor in chief noted that today’s model may have a different path to success than her predecessor but the foundation required to hit supermodel status is the same.

“Social media has changed the way girls become discovered and build on their success, but the DNA of the American supermodel hasn’t changed at all: she is still healthy, smart, hard-working, independent and always arrives with a smile,” Roitfeld offered.

But the landscape has indeed shifted since the height of the supermodel craze in the Eighties and Nineties when it was easy to recall them with the mere mention of their first names.

While there is a class of well-known models who have expanded their personal brands digitally today, these models are competing with other social media stars, reality TV personalities and celebrities for the covers of magazines.

The competition, while fierce, takes place amid a shift in the magazine industry, too. Magazine editors have begun rethinking the importance of the cover, as newsstand sales have deteriorated in recent years. Simply put, publishers are relying less upon the newsstand to generate big revenue.

But in some ways, the cover has never meant more and booking stars with a broad social media reach may amplify the magazine’s message. That may, in turn, diminish the demand for putting buzzy, emerging models on the cover — but not for CR.

Roitfeld explained: “Our readers love fashion and follow models as closely as we do. Of course Lady Gaga, Beyoncé, and Kim Kardashian have created huge buzz for us in the past, but I always like to balance the celebrity covers with model covers that speak to the dedicated lovers of fashion — such as myself.”

CR Fashion Book Issue 8 is part of a three-volume series that includes CR Men’s Book Issue 2 and CR Girls 2016. The three publications carry 500 pages in total, and they hit newsstands on Feb. 26.