The 340-page debut issue hits newsstands Sept. 13 with a fatter issue than expected. 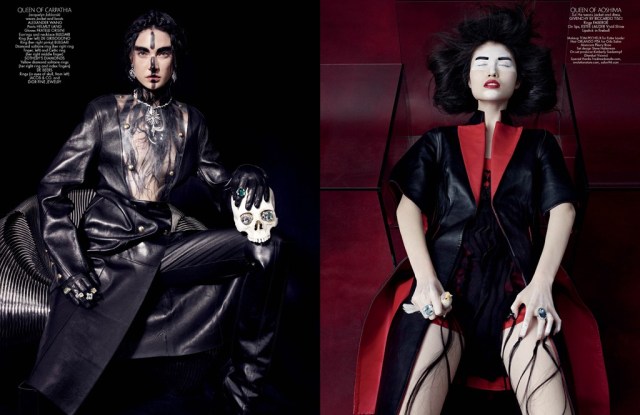 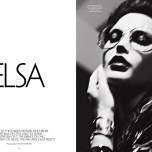 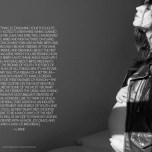 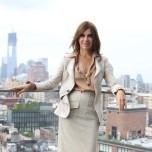 NEW YORK — Carine Roitfeld will send forth her CR Fashion Book magazine on newsstands Sept. 13 with a fatter issue than expected. The 340-page debut issue sold 150 pages of advertising, outpacing the original plan for 100 pages of ads. Brands that bought in include Giorgio Armani, Louis Vuitton, Dior, Tom Ford, Chanel and Estée Lauder.

Every ad in the new twice-a-year title is a double-page spread and includes a six-month presence on crfashionbook.com, which launched Tuesday, for an official package rate of $40,000. A number of premium positions in the front of the book were sold to advertisers who took multiple spreads, while the remainder of ads are positioned alphabetically through the book. “So it’s better to be Alexander Wang than Balenciaga,” said Roitfeld.

The launch will be celebrated on Saturday at a black-tie party at the Frick Collection, sponsored by Mercedes-Benz.

Overall, 50,000 copies of CR Fashion Book will be distributed, with a cover price of $15. That compares to a circulation of 55,000 in print and 45,000 via digital subscriptions for V magazine.

“We all know what the publishing industry is like these days. The cost of shoots keeps going up and the cost of paper keeps going up. So the break-even point is constantly changing,” said Stephen Gan, Roitfeld’s business partner in the project and design director of the title, of the economics of new venture. “But you know, the very positive reaction from the ad community has reflected itself in something quite lucrative for us. It hasn’t been as much of a struggle as I thought it would be with how are we going to pay for this first issue.”

About 90 percent of CR’s launch issue is dedicated to fashion shoots and 10 percent to features and stories. A rep for the magazine declined to reveal the cover subject but confirmed Bruce Weber shot it. According to sources, Weber shot model Kate Upton in Miami for the magazine.

Also shooting for the title is Michael Avedon, the college-age grandson of Richard Avedon. “It’s a bridge between legends and newborn talent. Avedon has a beautiful name but he’s new and fresh,” explained Roitfeld. A similar tack is taken with models. “We have big girls — I will say angels to protect the magazine — like Lara Stone and Linda Evangelista and Stephanie Seymour. But also very new models that no one knows.”

The magazine forgos a traditional front-of-book section, relegating those kind of short items to its Web site. The magazine is published on a heavy matte paper stock.

Gan and Roitfeld have a long history of working together, with Roitfeld styling the very first cover of V magazine in September 1999. The advertising effort at CR Fashion Book is headed by publisher Jorge Garcia — with a direct assist from Roitfeld, who met personally with marketers like David Lauren, executive vice president of advertising, marketing and corporate communications at Ralph Lauren Corp. A small team of editors — including editorial director Christopher Bartley, managing editor Steven Chaiken and senior fashion editor Michaela Dosamantes — work out of the Standard East hotel in New York.

The partnership between Roitfeld and Gan was initiated by the latter in the wake of Roitfeld’s exit from the editor in chief post of French Vogue in January 2011. “My goal was to really provide her with the framework and the publishing structure,” said Gan, who is editor in chief of V and creative director at Harper’s Bazaar. There are several silent investors in Fashion Media Group, said Gan. Roitfeld herself has an ownership stake in CR Fashion Book.

“After her so-called break-up [with French Vogue], it felt natural to propose that we do something together,” said Gan. “It’s been great proof to me that it’s a person who’s important over title. In philosophy, there’s a difference between self power and object-referral power, or power that is associated to title and positions,” said Gan. “Not to sound too New Age, but I always felt Carine had true self power. It wasn’t so much the context of the medium or where she chose to perform it.”

Roitfeld is launching a limited edition color cosmetics line with MAC this fall and appears in its advertising campaign, shot by Mario Sorrenti. She also styled fall ad campaigns for Dior and Givenchy.

“When I was at Vogue, I had a lot of freedom. But I was still in a beautiful golden cage. I could not do a campaign with Karl Lagerfeld or launch a line with MAC,” said Roitfeld. “I want to do all these propositions. I think its fun. This magazine is a project to do between all the other crazy projects I have. I want to enjoy, you know?”