Carine Roitfeld Looks to the Zodiac for Her New Wearable Calendars

“It’s not just Champagne,” insisted Carine Roitfeld in her heavily accented English. The star editor and stylist, who was on a brief visit to New York to visit her children and her other baby — CR Fashion Book’s creative agency CR Studio — wants you to know that “fashion people are very generous.”

So generous, in fact, that 12 models, Cindy Crawford, Irina Shayk and Doutzen Kroes among them, donated their time to pose for free for her CR Calendar 2020, with 100 percent of the proceeds going to charity.

“I think sometimes people think fashion people, we’re not nice, we’re superficial, we’re selfish, we just think that beauty is the only important thing, but that’s totally wrong. You can be beautiful, you can be smart and you love to share what you get with others,” she said.

In contrast to her two previous CR calendars where proceeds were donated to one charity, each model chose a cause this year. That includes the AmfAR for Stella Maxwell, Hetrick-Martin Institute for Miss Fame, Mothers2Mothers for Candice Swanepoel, Barc Shelter for Guinevere Van Seenus and Animal Haven for Carolyn Murphy.

“I thought it would be good for the buyer or the reader to discover the charities these 12 girls are really helping,” added Roitfeld. “They’re working hard. They go to the countries. They’re really active. I was surprised at the beginning that they do so much.”

And that’s not the only difference, as CR Calendar 2020, which launches today and was produced by CR Studio, is wearable. Shot by Brianna Capozzi, it’s comprised of 12 recycled cotton Redemption T-shirts for every month, with each model striking a pose to represent their associated star sign.

Crawford got wet to become a fluid Pisces (“Cindy never complains”), Alek Wek is a headstrong Aries, and Mariacarla Boscono is a passionate Scorpio.

“We have to change, no? We have to make surprise,” she said. “We did two already and did so many before with Vogue Paris so we decided to do a T-shirt because, first of all, less paper, so it’s more eco-friendly.” 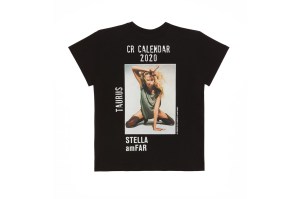 As for the zodiac theme of the calendar, signs are a good way to understand people, according to Roitfeld.

“In fashion, people really ask it,” she said. “Even Riccardo Tisci, one of the first things he asks someone when he meets them is ‘what is your sign.’ People are very excited to know the sign of the other one. It’s a way to break the ice. It’s the first question sometimes you will ask. You think you know very well the person when you ask about the sign.”

On how to wear the T-shirt, the French style icon prefers to mix hers with a conservative knee-length skirt and high heels. “It’s my way of wearing it because I’m not 22 so I’m wearing a way that it’s not ridiculous for me to wear this T-shirt, you know? I love to mix classics with rock ‘n’ roll or punk things. It’s always my signature.”

The calendar comes out almost a year after Roitfeld announced that she would be taking on a new role at the biannual CR Fashion Book print magazine she founded in 2012 after leaving French Vogue, overseeing editorial after years of leading it.

As for how that is working out, she admitted she’s still spending a lot of time at the magazine, “but a different sort of time,” helping to open the doors to more different and new stylists and photographers.

“Not just about me, me, me,” she said. “Because I think it’s boring and we need fresh blood and new talent. But I’m still there because there’s my name on the magazine so I have to be happy…I control it, you know. But when I trust someone, I give a lot of freedom always.”

The T-shirts are available for presale today from 8.30am at Redemption.com.

WATCH: Behind the Scenes of amFAR With Carine Roitfeld