The “Call Me Maybe” songstress will appear in a series of six commercials during the “Teen Choice 2013” broadcast, as well as a series of print advertisements. 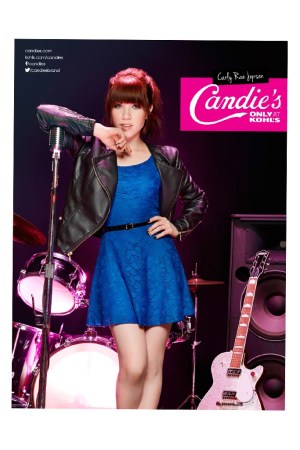 CARLY RAE FOR CANDIE’S: Following in the teen idol footsteps of Lea Michele, Vanessa Hudgens and Britney Spears, the newest Candie’s spokesmodel will be Carly Rae Jepsen for the brand’s back-to-school campaign. The “Call Me Maybe” songstress will appear in a series of six commercials during the “Teen Choice 2013” broadcast on Fox on Aug. 11 that will drive viewers to live flash sales on kohls.com, the exclusive online and in-store retailer of Candie’s.

This is the first time a fashion marketer has created a live selling event during a broadcast program, according to Iconix Brand Group, owner of Candie’s. The sales will last for 48 hours and offer special prices on Candie’s apparel, shoes, accessories, jewelry and beauty products.

“Who doesn’t love a sale?” said Jepsen, 27, of the campaign, which also entails print advertisements that break in August lifestyle and fashion titles, including Seventeen and Teen Vogue. Titled “Hard at Work,” those images showcase Jepsen’s life as a rising pop star — writing music, recording in the studio and performing on stage.

“My mom is a bit of a hippie and I definitely take after that.…Give me shorts and a crop top and I’m a happy camper,” Jepsen told WWD of her preferred look. “I like to mix and match and have fun with fashion. I don’t like to be pigeonholed into one thing. That’s what’s fun about Candie’s, they have a lot of things to play with.”

Jepsen’s style icons include Mary-Kate and Ashley Olsen. “They are 5-foot-2 and petite and so am I, so when I see them pull something off, I think, ‘If they can do it, maybe I can also,’” she noted.