Kenzo Takada, Jean-Charles de Castelbajac and Christian Louboutin were among those turning out to the ceremony for the former Elle fixture. 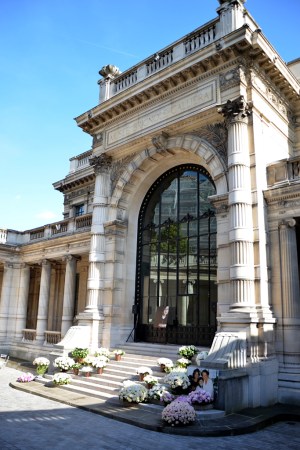 PARIS — The fashion world gathered to remember the late Catherine Rousso at a tribute held Wednesday evening at the Palais Galliera here.

Kenzo Takada, Chantal Thomass, Jean-Charles de Castelbajac, Christian Louboutin, Martine Sitbon, Marc Ascoli, Jean-Baptiste Mondino, Vanessa Bruno, Inès de la Fressange and Jean-Jacques Picart were among those turning out to the ceremony for the late Elle editor in chief for fashion who died June 11 at age 70 after a long illness.

The tribute was simple and elegant, a large photo of Rousso — unfathomably chic — and white flowers propped on the front stairs of the fashion museum.

“After some runway shows, she would say she had the goose bumps,” said Constance Benqué, chief executive officer of Elle France and International.

“She was joyful, feminine and chic…,” said Denis Olivennes, the chairman and ceo of Elle parent company, Lagardère Active in a speech that Benqué read on his behalf.

Her sister, Fabienne, thanked Nicolas Ghesquière for visiting Rousso at the hospital and giving her blouses he designed for her.

“Catherine was discreet, shy in a way but always very warm and supportive with me even if ‘Elle women style’ was much more ‘active’ than my work. But she appreciated, I do think, something special, truly French, genuine in my fashion, something connected with roots and culture; ‘the French exception’ as we used to say about movies and cheese,” said Christian Lacroix.

“She is the first editor who featured me when I arrived in Paris in 1969. I was coming from my countryside. Then she styled my first show at the Palais Royal. She really helped me. She gave me 13 or 14 covers of French Elle,” de Castelbajac told WWD.

“She was benevolent,” Louboutin said. The designer recalled her unique style as “her way to mix modern and vintage.”

“She really supported young designers. She was one of the first ones to come and see Sacai for instance,” said public relations guru Lucien Pagès.

On a table in the courtyard, there was a collection of some of her covers and shoots for French Elle, including the joyful cover featuring a model with a monkey on the head shot by Oliviero Toscani and of Tilda Swinton all in white lensed by Mondino.