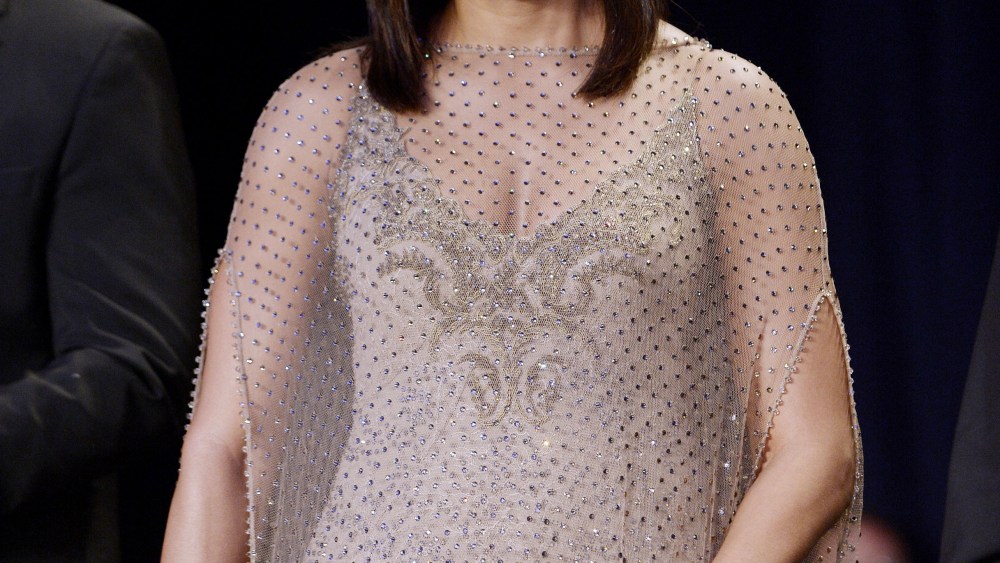 It felt a lot like a going away party: joyful but bittersweet.

Celebrities, politicians and media types descended on Washington for President Obama’s last White House Correspondents’ Association dinner Saturday night, but first, they made the rounds at the various parties, which are held throughout the weekend. Partygoers chattered about the highly entertaining and somewhat surreal presidential campaign — and in particular, Republican front-runner Donald Trump.

“This is the most bizarre year I’ve ever seen in all my years of public service or before,” said Sen. Susan Collins (R., Maine) at The New Yorker party at the rooftop of the W Hotel Friday night. The 64-year-old Republican has been in the Senate since 1997, for the record.

Before chatting with former Congresswoman Gabby Giffords, Damien Lewis, the star of Showtime’s “Billions” and before that “Homeland,” echoed the senator’s sentiment.

“Are we on record?” the British actor said with a laugh. “It’s a little daunting what’s going on here.…It’s difficult not to see the whole thing like a game show at the moment, and let’s just see what happens.”

New Yorker editor in chief David Remnick, who has penned several stories in the magazine on Trump’s candidacy, offered: “I fully confess that I would have never imagined that he would run except as a kind of mark. I don’t think he ever imagined he’d get this far. But imagination is not journalism, so we’d better cover the story really well. My feelings about this are obvious. I can imagine him giving a speech at a party. I can’t imagine him in charge of the United States armed forces and the nuclear codes.”

As Sting arrived at the party, Remnick briefly addressed Trump’s ascendancy, noting that it is linked, in part, to “television’s desire for ratings.”

“They are so desperate that they show speech after speech after speech because he gets ratings. That’s a quandary. I understand the quandary, but I don’t necessarily think that journalism has to always do with giving people the crack cocaine that they want at the very minute that they want it at the dosage they seem to want,” he said. “I think he knew it and he exploited it. It allowed him to spend the minimum amount of money on his campaign. The reasons for him being where he is, is a lot deeper than MSNBC and CNN and Fox.”

Then Remnick said something a bit surprising: “My politics are polar opposite from Fox, but I found that in the debates, the Fox questioning was tougher. Megyn Kelly’s questioning is a lot tougher than Wolf Blitzer’s.”

Meanwhile, at the Time Inc./People cocktail a few blocks away at the St. Regis, Time magazine editor in chief Nancy Gibbs buckled down for the busy weekend after just coming off her title’s Time 100 event, which welcomed Donald and Melania Trump.

“If Raymour & Flanigan had a clothing outlet, it would dress D.C.,” joked writer Peter Godwin, who surveyed the interesting fashions while his wife, Cosmopolitan editor in chief Joanna Coles dipped in and out of conversations with NBC president Deborah Turness, actress Rosario Dawson and a host of passersby.

He may have been onto something. That evening, guests wearing tuxedos and gowns, many of which consisted of brightly colored chiffon, headed to the Washington Hilton for drinks before the Correspondents’ dinner — aka “The Nerd Prom.”

At the CBS pre-party, Democratic presidential candidate Bernie Sanders was the big draw. Sanders — not one to miss a chance for votes — dutifully posed for selfies while holding what looked like a glass of Coca-Cola.

“He’s taller than I expected,” marveled one guest. “Are you feeling the Bern?” asked another before asking for a photo. “OK, OK,” Sanders said as he eked out a grin.

Following the dinner, which was hosted by Comedy Central’s Larry Wilmore, VIPs made a beeline to the Vanity Fair/Bloomberg party, held at the residence of the French ambassador, Gérard Araud.

“Outside is where the stars go,” said MSNBC’s Chris Matthews, who cut through the crowded party toward the outdoor bar. Meanwhile, in one of the side rooms, Gillian Tett, the U.S. manager of the Financial Times, chatted up fellow Brit, actress Emma Watson, next to a station of desserts, which included glazed doughnuts and chocolate soufflé.

“Do you want to meet any politicians” Tett asked Watson. “John Kerry is here.”

Watson remained in the corner — between the sweets and the bar, however, allowing guests to come to her.

“I directed ‘Spotlight,'” said Tom McCarthy. “Oh my god you did!” Watson said, excitedly, before giving him the rundown of the personal project she had been working on.

While Kerry was a pretty good sighting, it was Vice President Joe Biden who upstaged his colleague and the star-heavy crowd. With his Secret Service detail in tow, Biden stayed at the party for about an hour, taking photos with guests, before heading out.

“Is Joe Biden still here?” “Broad City’s” Ilana Glazer asked her co-star Abbie Jacobson. The comedians looked around with a shrug as Helen Mirren, who sported a deep purple gown and matching tattoo on her clavicle of the symbol that is synonymous with Prince, walked by.