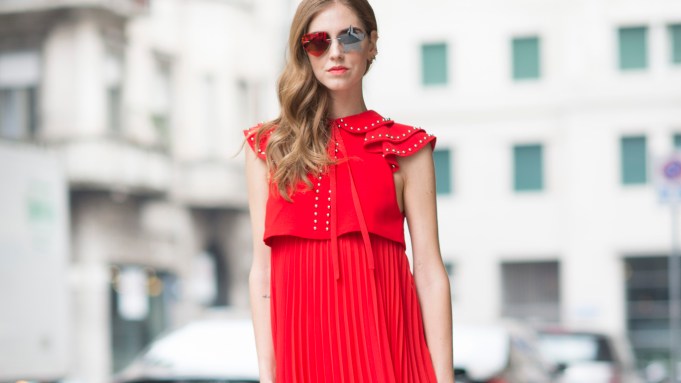 It’s a blog life for The Blonde Salad’s Chiara Ferragni, who’s bringing her kid sister into her ever-expanding business, which is also opening a store in Milan, relaunching its flagship site and on track to boost shoe sales by almost 30 percent to $10 million this year.

Born in Milan but based in Los Angeles, Ferragni has 5.6 million Instagram followers and a blossoming multihyphenate career that puts her at the vanguard of the blogger-turned-businesswoman movement. She’s also a model (she’s the face of Pantene, Amazon Fashion in Europe and has appeared on the cover of 27 magazines including Vogue Espana and InStyle Berlin) and creative director of her shoe company, Chiara Ferragni Collection.

It’s the shoes that really bring in the money. Sold in about 300 doors worldwide, the footwear business accounted for about 75 percent of her company’s nearly $10 million in revenues last year. Soon the brand will have its own home in the real world. Riccardo Pozzoli, cofounder and chief executive officer of Chiara Ferragni, Theblondesalad.com and Chiara Ferragni Collection, said the first Chiara Ferragni Collection flagship store in Milan by early next year.

But the fastest-growing parts of the business are The Blonde Salad Web site and Ferragni’s personal appearances and partnerships, according to group general manager Alessio Sanzogni. Theblondesalad.com and personal appearances by Ferragni together drove over $2 million in revenues last year and are projected to reach $3.8 million this year, a 75 percent jump.

This boost is largely driven by partnerships with megacompanies. Ferragni’s Amazon’s European fashion campaign goes live online next week and appears in the March issues of Vogue, Harper’s Bazaar and Elle in France, Spain, Italy, Germany and the U.K. Her footwear collection will also be sold through Amazon.

Sanzogni declined to reveal terms of the Amazon deal, but a source in the digital space told WWD it’s lucrative. The e-commerce giant is reportedly paying Ferragni about $300,000 to be the face of Amazon Fashion for one season in Europe. Amazon declined to disclose the financial details of the partnership.

To position itself for further growth, the company will introduce a redesigned Theblondesalad.com in June.

“We want to internalize and fully manage all the advertising, [including] display, engagement and all of the commercial parts of the The Blonde Salad,” Sanzogni said, admitting advertising revenues were “quite low last year.” The majority of turnover came from integrated editorial content, social media and events attended on behalf of brands, including a yearlong partnership with Calvin Klein.

According to an industry source, Calvin Klein forked over six figures to work with Ferragni and advertise on Theblondesalad.com. It was not an exclusive deal, since Ferragni continued to work with different brands, from Pantene to Revolve Clothing.

“These are big deals, but we haven’t done anything super, crazy big because we like working with a lot of brands,” said Ferragni, who avoided disclosing specific fees.

“We expect a higher deal to be exclusive to only one brand at the moment,” Sanzogni added.

That could be a reference to Kristina Bazan, the blogger who reportedly landed a seven-figure contract with L’Oréal in October. While this is said to be the largest blogger deal to date, Bazan is likely exclusive to the beauty giant and therefore unable to work with a competitor while under contract with L’Oreal. L’Oreal declined to comment on terms of the deal.

Theblondesalad.com will also roll out an e-store in September, selling exclusive product from 30 brands to start (including Ferragni’s own). Ferragni worked with Levi’s to design two custom pairs of 501 jeans that will each retail for about $270. Thirty pairs were made of each style, which Ferragni described as “deconstructed and vintage-inspired” and containing elements such as embroidery and hand-painted hearts.

Ferragni is also bringing her sister into the business. Valentina Ferragni, who is 23 and has 900,000 Instagram followers, is now managed by TBS Talent, the company’s newly formed management arm.

The younger Ferragni, who already was seated front row at Ralph Lauren’s show during New York Fashion Week, has a “complementary” positioning to Chiara, according to Sanzogni, who said Valentina’s “younger target demographic and different style” were attractive to followers. TBS Talent represents Pozzoli, as well, who has a sizeable following of 155,000 on Instagram.

“All of the interest around Chiara’s universe and friends and family is super high,” Sanzogni said.