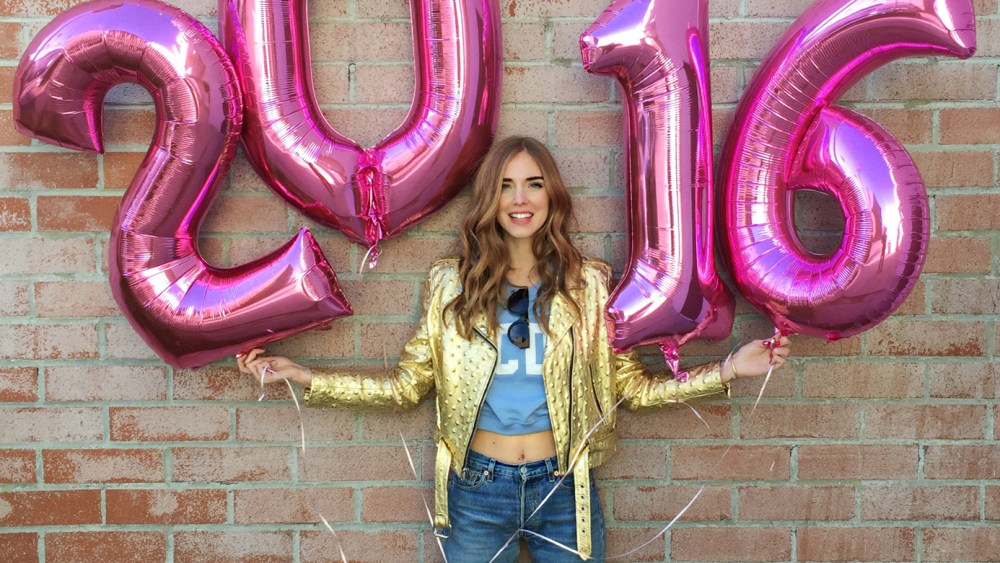 While once seen as a front-row novelty — and perhaps a fad — many of the top bloggers now are increasingly brands in their own right who generate most of their income from endorsements or working with leading companies as part of their marketing and promotions campaigns.

And those incomes are becoming substantial, with the top names making between $1 million and $3 million a year.

A yearlong campaign with a brand can easily generate half a million dollars for the blogger, but the contracts are getting more lucrative with each passing year. For instance, Kristina Bazan, who has 2.2 million Instagram followers, is said to have set a new bar in the industry, nabbing a seven-figure contract with L’Oréal in October.

To keep this business of exposure clicking along, an ecosystem of management companies has sprouted up and taken charge of the wheeling and dealing for digital influencers. They work to transform bloggers into brands and negotiate rates, driving yearly income for significant digital fashion influencers ever upward.

They’re not apologizing for it.

“We all need to stop pretending that it’s a bad thing that digital influencers are compensated for their work,” said Raina Penchansky, cofounder of Digital Brand Architects, or DBA. “The digital space, bloggers included, is egalitarian. And since when is egalitarian a bad thing?”

Five-year-old DBA is phasing out the digital services portion of its business that provided public relations and digital strategy to brands and will instead focus its 30 employees on influencer-management business.

Penchansky and cofounder Karen Robinovitz supported the business at its start with digital public relations and strategy work for companies such as Hasbro, Volvo, White House|Black Market, Calypso and Marc Fisher.

“Services businesses kept the lights on for the first few years when everyone laughed in our face,” Penchansky said. “Everyone told us we were crazy; people said no one would pay for influencers.”

DBA is simply following the money.

Sources expect the firm’s client roster of 130 influencers to take in a combined $50 million in revenue this year.

While Robinovitz and Penchansky declined to comment on specific earnings of the firm’s top grossing talent — which includes Aimee Song of Song of Style, Chriselle Lim of The Chriselle Factor, Jamie Beck of Ann Street Studio, Rachel Parcell of Pink Peonies, Julia Engel of Gal Meets Glam, Tina Craig and Kelly Cook of Bag Snobs, Amber Fillerup Clark of Barefoot Blonde and Shea Marie of Peace Love Shea — it’s rumored that everyone on the list will take in between $1 million and $3 million this year. Song, Engel and Marie all declined to give specifics on their earnings.

To further capitalize on its bloggers’ budding brands, DBA introduced a product arm, Digital Brand Products, earlier this year that exclusively works on cultivating tangible goods to sell. Currently, a dozen clients have products set to launch this year. Their offerings span from dressings and sauces to beauty products and full ready-to-wear collections.

There’s also been something of a blogger backlash that’s ebbed and flowed as the group flourished and evolved.

Originally bloggers were criticized for not being journalists, but all except very few were quick to acknowledge that they weren’t in the news business. When the question of editorial integrity arose, the Federal Trade Commission outlined a set of guidelines on when content creators must disclose a sponsored or paid post. Last June, the FTC updated those requirements to include more detailed rules pertaining to social media and sponsored posts. For instance, a contest that is endorsed by a brand must be disclosed and a sponsored video must have a disclaimer at the beginning.

The sheer volume of bloggers — spanning all ages, demographics, interests and cities across the globe — suggests there is no end in sight to the digital gold rush, with a never-ending stream of bloggers determined to become the next generation of online celebrities and attract top-shelf advertisers as partners.

One could question whether the amounts bloggers are being paid is money well spent, but brands are seeing a definite return on investment from the relationship — otherwise they wouldn’t keep spending. As brands increasingly aim to take their marketing message direct to the consumer, shifting more of their ad budgets to social media, YouTube or other means, bloggers have become a key part of the mix.

Parcell of Pink Peonies reportedly drove $1 million in sales to nordstrom.com during the holiday season in 2014. When reached for comment, she declined to speak on dollar amounts. Parcell said she is “superproud of having a successful relationship with Nordstrom.”

Shopping search engine ShopStyle’s influencer and blogger affiliate network, ShopStyle Collective, saw December sales driven by bloggers increase 315 percent year-over-year. According to sources close to the company, these content creators spurred on $8 million in sales for the month, with the most popular destinations for consumers including Burberry, Ugg Australia, Donna Karan, Jeffrey Campbell and Club Monaco. Eighty percent of those sales came were driven by the network’s top 100 bloggers.

In July through August, Neiman Marcus teamed up with nine bloggers to drive online and brick-and-mortar sales. They hosted a series of in-store events across the country, which resulted in 147,000 social interactions. Surrounding a Halloween partnership, blogger Christine Andrew of Hello Fashion fueled a 107 percent uptick in “likes” and 465 percent increase in comments to Neiman Marcus’ Instagram page.

In addition to developing products and brand and retail partnerships, affiliate marketing arrangements are a significant revenue channel for the digital set. Through firms like ShopStyle Collective and RewardStyle, bloggers earn a fee each time they refer a reader to a retailer’s or brand’s site. It doesn’t sound like much, but the pennies can add up: Top earners can garner six figures a month, and Forrester Research predicts spending on affiliate marketing to reach $4.5 billion this year.

That’s far from the only revenue stream for influencers.

Chiara Ferragni of the Blonde Salad is the reigning queen of the blogosphere, amassing 5.2 million Instagram followers in a few short years. Ferragni sees healthy revenue from her Web site, personal appearances and partnerships — to the tune of about $2.5 million in 2015 — but it’s retail that’s turning her site into a brand.

The Italian-born blogger, who several years ago started developing product to scale her Blonde Salad brand, now has a multimillion-dollar shoe company. Alessio Sanzogni, group general manager of Chiara Ferragni, Theblondesalad.com and Chiara Ferragni Collection, told WWD that the business hit almost $10 million in revenue in 2015, with about $7.5 million of that coming from footwear sales.

Sanzogni, who worked at Louis Vuitton for nearly six years before joining Ferragni, has worked closely with Ferragni over the past two years on extending The Blonde Salad beyond its Web site roots — and it appears to be working.

“We don’t have superbig money deals — only one-third of our work is paid and the rest is organic content. We aren’t looking to be limited [to one brand],” Sanzogni said. Instead, he said Ferragni prefers to work with partners in a smaller capacity because big deals often lead to exclusivity clauses. Ferragni has yet to sign a six-figure deal with any one specific brand, but she’s open to the opportunity as long as she can maintain freedom to mention the brands and styles she chooses.

He said that affiliate marketing is not a focus and is “not relevant to our income right now.” The Blonde Salad Crew, or TBS Crew, currently employs 19 people, including cofounder and chief executive officer Riccardo Pozzoli. Sanzogni said the company turned a six-digit profit for first time in 2014 and this amount doubled last year.

Jennifer Powell, head of Next Model Management’s influencer division, said that her team is trying to build businesses and brands around the talent they work with, which includes Julie Sarinana of Sincerely Jules, Shea Marie of Peace Love Shea, Helena Bordon and Kristina Bazan.

Switzerland-born blogger Bazan nabbed one of the most-coveted deals for celebrities, models and now, bloggers: being named a brand ambassador for L’Oréal, a plum position held by the likes of Julianne Moore, Naomi Watts and Blake Lively.

Yann Joffredo, vice president of global cosmetics at L’Oréal Paris, told WWD that while he’s unable to give details about the length of the contract with Bazan, “signing for one shoot was absolutely not the idea when we contracted Kristina.” L’Oréal Paris declined to comment on how much they are paying Bazan.

“Kristina really works with us, she gives us feedback on our products, and as she is a real L’Oréalista and very connected with her community, it gives us very useful insights. She is also an insider to all of our events, again to show in her own way, the L’Oréal Paris world. This is a deep relationship, [it’s] very unique [and] not the kind we have with magazines — that are also very strong, but in a different way,” Joffredo said, adding that digital is at the core of the company’s campaigns and serves as an amplifier.

For Powell, similar to celebrities and models, the holy grail of partnerships for bloggers is a contract with a beauty brand — hair or cosmetics. She said the goal is to get talent working with a beauty brand. Not only is the fee typically higher, but these contracts can last from one year to multiple years.

“The bigger-situation deals like Michelle Phan haven’t been constant yet, but they are coming,” said Jung. He has orchestrated six-figure deals with clients, who include Bethany Mota of YouTube fame, but he declined to name which talent snags the highest rates.

Those interviewed for the story declined to name which brands fork over the most cash to work with bloggers, but insiders say Nordstrom and L’Oréal are among the highest-paying companies when it comes to working with digital talent.

With brands getting the clicks and sales they want and bloggers pulling in millions, it’s a relationship that’s moved beyond a fling and is set to grow even more serious.