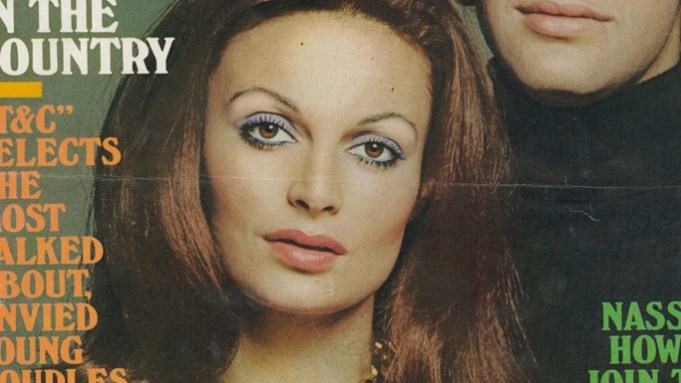 It’s not quite the classic rags-to-riches story of a poor immigrant landing in America with just a few bucks in his pocket and a dream of finding fame in the fashion industry, but nonetheless, Diane von Furstenberg arrived in the U.S. 44 years ago with the idea of making her own name.

With notions of becoming a designer, the striking young princess, who had married German prince Egon Von Furstenberg just a year earlier, came with a suitcase filled with jersey dresses that she’d had made in a friend’s factory in Italy.

Although she arrived with far more connections than most, the Belgian-born von Furstenberg wanted her own identity. She achieved that feat quickly, charming the media with her fairy-tale story and good looks.

She would often say: “I didn’t always know what I wanted to do, but I knew the kind of woman I wanted to be.” But by the time she came to the U.S., von Furstenberg did know she wanted to start her own line of women’s clothing. Kick-starting her business would prove to be a natural for her.

A glamorous, leggy socialite with high cheekbones and an elegant yet effortless style, she quickly took New York by storm. She was photographed often at sizzling Studio 54 or catching up with well-heeled friends and acquaintances like Andy Warhol, Yves Saint Laurent, Pierre Bergé, Diana Vreeland, Halston, Bianca Jagger, Iman and Barry Diller (whom she would later marry, following her divorce from the prince in 1983).

“Her lifestyle and her business were very engaging,” said Eran Cohen, chief marketing office at DVF. “She was a princess living in New York surrounded by the who’s who of fashion and her husband, Egon, the prince. She was selling this simple dress, and it really took off.”

In March 1972, she landed the cover of socialite glossy Town & Country with Egon. Called “The Couple Who Conquered New York,” the cover depicts Diane front and center, while the prince furtively remained in the background.

But Diane, who was the focal point of that cover, was also on the rise for her talent as a dress designer. And she often served as her own model. In her first advertising campaign, the designer posed coolly on a white block in a chain-link print dress. On the block, she wrote in marker: “Feel like a woman, wear a dress,” in loopy cursive that was accompanied by her signature. The photo would launch her line, and eventually become the brand’s tag line, which she still uses today.

And then, in 1974, von Furstenberg hit on something big. She introduced the knitted jersey “wrap dress,” which was meant to make women feel effortlessly sexy and independent.

According to Cohen, the roots of the brand came from that dress and that first campaign.

“The idea of the brand, this effortless, sexy kind of feel — it permeates everything we do,” he said. “In the Seventies, Diane was really the face of her brand. That was novel. Even back then, she was innovating. In the days before social media, she was social, on the plane, going everywhere, meeting with customers.”

Her authenticity resonated. In the Sept. 13, 1976, issue of The New Yorker, the magazine reported that the 29-year-old von Furstenberg reeled in $60 million in sales in 1975. A year later, the company said it sold over a million wrap dresses, and that feat landed the designer on the March 22, 1976, cover of Newsweek.

Headlined “Rags & Riches,”  Newsweek hadn’t initially intended to put the designer on the cover; President Gerald Ford was slated for that lofty honor. But, at the last minute, the editors switched him out, Cohen said, noting that it would be one of many covers the designer would nab. Interview magazine put her on its cover twice, once in 1977 and then in 1981. She would use the latter cover, Richard Bernstein’s illustration of her in a Balinese headdress, as inspiration for her well-known lips logo, which she uses in her ads, stores and on clothing and accessories to this day.

By 1979, the brand had reached about $150 million in annual retail sales, according to a story in The New York Times. Around this time, the designer was working with and discovering new, burgeoning talent in the modeling world for her ad campaigns and runway shows. Some of those models included Jerry Hall, Gia Carangi, Iman, Janice Dickinson and Pat Cleveland.

While it’s true that just about every “It” model has walked or posed for von Furstenberg, the designer’s eye for new talent hasn’t dissipated. She was among the first designers to use “It” girls Arizona Muse, Karlie Kloss and Daria Werbowy, who is the current face of her brand.

But in the mid-Eighties, von Furstenberg’s business had slowed down. Eschewing bankruptcy, the designer moved back to Europe. Determined, she eventually returned to New York in 1990 and began rebuilding her name. In 1997, she relaunched her company with the wrap dress, after she saw young women buying the dresses in vintage shops. She played off that theme in her ad campaign, which was shot by Bettina Rheims, featuring model Danielle Zinaich. The black-and-white spring 1998 campaign included two shots of the same model and the quote: “He stared at me all night. Then he said, ‘Something about you reminds me of my mother.’”

When the brand hired Laird + Partners in 2011, the creative agency continued von Furstenberg’s playful humor with a surrealist spring 2012 campaign by Camilla Akrans. It featured a model wearing a mirrored mask over her face, reflecting the sky, a sort of nod to Salvador Dalí, and the designer’s motto: “Be the woman that you want to be.”

According to Hans Dorsinville, executive vice president and senior creative director at Laird, the advertising campaigns were just an extension of the brand’s roots.

“Diane is the embodiment of the brand. We asked who should this woman be? It was very much Diane,” Dorsinville said, adding that the agency came up with three words that represented the brand: effortless, sexy and on-the-go.

Using those words and vintage photographs as inspiration, as well as signature prints, Laird began to piece together how it would devise its creative strategy. Along with von Furstenberg, the agency identified Daria Werbowy as a muse  and someone who embodied the brand and looked like its founder. It also brought on stylist Edward Enninful, who works on DVF’s runway shows, so its campaigns would maintain a sense of consistency.

Although the brand’s core has not changed, Dorsinville noted that the agency is working more on digital initiatives and targeted outdoor advertising.

He noted that working with the founder of the brand is “helpful” — particularly this founder, who is constantly looking forward and striving to innovate.

“Advertising is always the same. You work with these brands — there’s lots of competition — but you find their voice,” Dorsinville said. “Diane says, ‘Repetition is recognition.’ In fashion, things move so fast, but a brand has to have some consistency.”