Stella McCartney — never one to take herself too seriously — has tapped British artist Barry Reigate to illustrate her fall ad campaign. 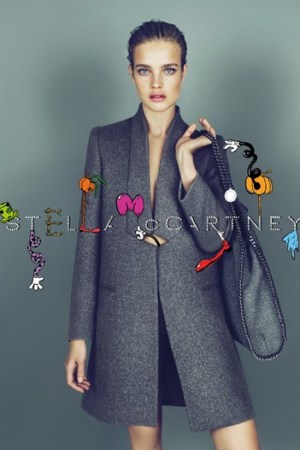 COLOR FORMS: Stella McCartney — never one to take herself too seriously — has tapped British artist Barry Reigate to illustrate her fall ad campaign, shot by Mert Alas and Marcus Piggott. Reigate, whose work often has a dark and sinister feel, took a decidedly lighthearted approach to this assignment, drawing cartoonish chubby letters, top hats, paint splotches, pumpkins and spiders all over McCartney’s logo — and clothing. McCartney told WWD she was after “something direct and simple, using Natalia [Vodianova] and key collection pieces, contrasted by humor and a human touch in the treatment of the logo.” In the past, McCartney has worked with artists including Robert Crumb, and last fall she tapped the furry, four-legged cast of Walt Disney’s “Bambi.” The latest campaign will break in the September issues of British, French and Italian Vogue, Love, Another Magazine and V Magazine.

This story first appeared in the July 26, 2010 issue of WWD. Subscribe Today.

US WEEKLY GROWS UP: Us Weekly is marking its 10th anniversary with a shocker — and no, it’s not another ‘We’re getting married!’ cover story. Rather, the surprise will come in the form of understatement, a quality not normally associated with the secrets-baring Wenner Media title (or with its editors emeritae, Bonnie Fuller and Janice Min). Indeed, according to publisher Victoria Lasdon Rose, there will be very little back-patting when the once-monthly title, which was relaunched as a celebrity weekly in 2000, celebrates a decade of makeups, breakups and scandals. Instead, “Stars Who Care” will be the focus of the festivities, which launch this fall and will include a nationally coordinated volunteer day (“Celebrate for a Cause”), eBay celebrity charity auctions, in-book features on do-gooder stars and their favorite organizations, a limited edition T-shirt (created by a “notable” but still-unnamed designer) and, yes, a tie-in with Us’ annual Hot Hollywood event in October.

“We really didn’t want to focus, as many anniversary issues do, on a look back,” said Rose, who’s been at the business helm since September 2000. “We wanted it to be really current and [about] what we’re seeing now. And the thing that kept resonating with me, from the conversations we’ve had with media or clients, is that one of the greatest attributes associated with the celebrities we cover is how they have used their notoriety and their popularity to become advocates for others.” How Lindsay, Mischa, Britney and “The Hills” gang fit into that is hard to say. But with a certain celebrity subset, giving back is hot — Brad, Angelina, Sean Penn and Madonna are all doing it — and Rose is positioning the magazine’s anniversary accordingly. The details of the multiprong program are still being fleshed out, though. Added Rose, “It’s like an invitation that says, ‘Come celebrate with us, but no gifts.’” Except for those from advertisers — in the form of ad pages, sponsorships and various other integrated-marketing opportunities. Because, at the end of the day, Us isn’t a charity and could use the ad-page boost: Year to date, the title’s ad pages are down 1.26 percent, to 926.58, according to Media Industry Newsletter (although it still is second to People in the category in terms of total pages year to date).