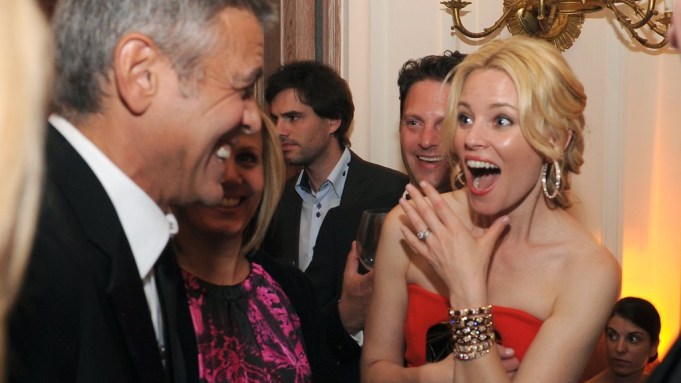 COMEDY AND MAGIC: Early Saturday afternoon at Beall-Washington House in Washington’s Georgetown neighborhood, Gerard Senehi was putting on a show. A small crowd at Tammy Haddad’s annual pre-White House Correspondents’ Dinner brunch gathered around the professional magician who bills himself as “The Experimentalist,” as Senehi used sleight of hand to levitate bar crackers and slide wedding bands off fingers to the astonishment of partygoers like Zynga founder Mark Pincus. To his right, Gayle King chatted with a fellow partygoer about Washington dress codes. “In New York it’s different; in New York a black-tie dress can be short,” King explained. “If you own it,” the other woman agreed. “If you own your look.”

Due to the threat of rain, most of the annual pregame party was held in a large tent instead of in the open air out back. Lindsay Lohan made a blink-and-you-missed-it appearance. A very relaxed Woody Harrelson braved the occasional raindrop out back, posing for fans. Kerry Washington, who works for the Obama campaign, and her seatmate Rosario Dawson took pictures with fans. David Axelrod did his best to cut through the din with a hard-to-hear joke about there being “a little bit of narcissism in the room.”

Up front, his show momentarily paused, Senehi considered his audience. “I just do things that people can’t explain,” the sport-coated magician said with a wry smile. “It makes being here kind of cool, otherwise I’d be like fish out of water.…I like mystery and I like uncertainty and there’s a lot of certainty in this room.”

Later that night at the dinner at the Washington Hilton, Kim Kardashian, guest of Fox News’ Greta Van Susteren, strode in off the escalator behind her mother, Kris Jenner.

“I have a cute story for you,” Jenner said. “Kim was invited to this dinner a few years ago, last minute. She didn’t have a dress, so I let her borrow a vintage Valentino gown I wore when I was married to her dad. I got to see her in a dress I wore 25 years earlier.”

Kardashian, who wore a Johanna Johnson dress on this night, smiled, “Oh mom, that’s so nice.”

Between posing for pictures with fans, Kardashian said she hadn’t made up her mind for the general election. Word of Kim Kardashian, Undecided Voter, apparently never made it to the President.

“Why am I telling knock-knock jokes to Kim Kardashian?” the President later said in a faux hot mic moment before his remarks. “What is she famous for, anyway?”

Lohan, in vintage Galanos, appeared uncomfortable standing in the middle of the lobby. “I feel so exposed right now, please protect me,” she whispered. “This is my first White House dinner.…I just don’t know where we’re going, can we figure this out?”

Her group assured her everything would be fine. “I just want to sit down, people are staring,” she said.

Goldie Hawn didn’t seem to mind all the attention, posing for pictures with her date for the evening, Piers Morgan. She stopped a throng of photographers.

“You are? Oh my gosh! I can’t believe it,” said a disbelieving Hawn. “You know, we didn’t even discuss this beforehand.”

After the dinner wrapped up, by 11:30, a full-on traffic jam, combined with rain and an intense security procedure caused a major bottleneck at Vanity Fair’s after party at the residence of the French ambassador in the city’s Sheridan-Kalorama neighborhood. Even Graydon Carter was forced to wait — for at least a little bit — with his companions for the night, Rachel Feinstein, John Currin and Martin Short.

“Does anyone have any pull?” Short mugged as the foursome joined the line.

Hawn shared a couch with Uggie, the Jack Russell terrier from “The Artist” on the smoker’s deck out back. Judd Apatow and David Carr had what sounded like a conversation about the prospects for a second season of “Girls.”

George Clooney, who seemed to have quite enjoyed his evening, showed up around 2 a.m. and had a long conversation with Jimmy Kimmel in the front hall as what remained of the guest list gawked. Earlier in the evening, Elizabeth Banks and her husband, the producer Max Handelman, had dissected Kimmel’s routine.

“I felt bad for Chris Christie,” the actress said.

“It’s not the first time in his life he’s heard a fat joke,” Handelman countered.

A short time later, Christie, in conversation with Jake Tapper in the front hall, appeared no worse for the wear. The New Jersey governor, the subject of many a national campaign rumor, could be overheard telling Tapper about the need for a “grown up who can actually fix things.”

The context may not have been clear, but he definitely seemed certain of something.