This is the second such lawsuit against the popular web site, which describes its aim as being to “defy the stale conventions of the past.”

Pop culture web site Complex is being accused, for the second time in three years, of discriminating against a female employee once she became pregnant.

Margrette Robinson, who headed up sales of Complex’s spirits accounts and related brand partnerships, accused the media outlet of discrimination, creating a hostile work environment and retaliation once she revealed her pregnancy in April 2018, all of which violate New York state laws. She is also accusing her former boss, Larry Menkes, regional vice president for brand partnerships at Complex, of the same actions. Since 2016, Complex has been owned through a joint venture between Hearst and Verizon. A spokesman for Verizon declined to comment, citing a policy on pending litigation, while Hearst and Complex could not be reached.

Robinson describes Menkes’ initial reaction to her informing him that she was pregnant and would be unable to attend the company’s annual ComplexCon event given her due date as “odd” and alleges he immediately said the chief revenue officer needed to be told. More than that, she claims that within a month of her disclosure, Menkes held a private meeting with her to inform her “as a friend” that she was going to be fired in the coming months because of unspecified “performance issues.” Robinson added that Menkes said he was telling her in advance so she could start taking job interviews before her pregnancy started to show.

Given she had had a formal performance review a month before revealing her pregnancy, in which Robinson claims she was told her performance was good and that she was meeting her sales expectations of roughly $1 million in sales per quarter, Robinson was “completely shocked” by Menkes’ comments.

Robinson also briefly mentioned “a culture of discrimination against, harassment of and retaliation against women,” at least for those working under Menkes. She described and included a photocopy of a drawing Menkes had up for a time, depicting himself “scolding his daughters,” perceived to be his three female employees at the time. When one would leave Complex, a face would allegedly get an “X.” 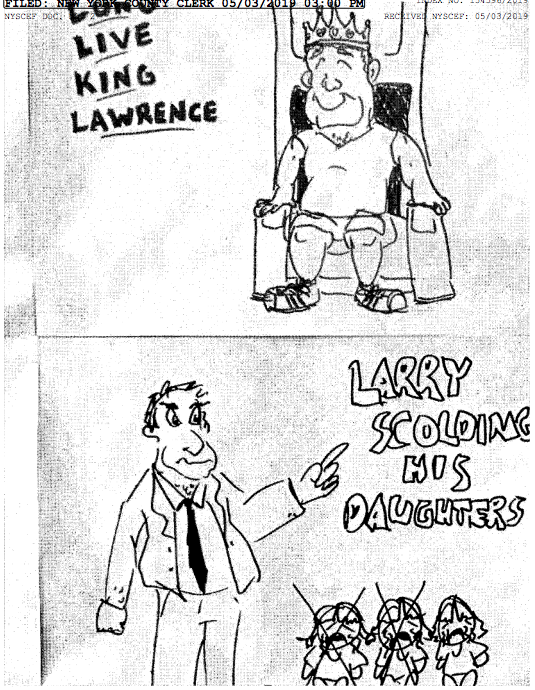 A drawing Menkes allegedly had up in the Complex offices for a time.

Within days of her private meeting with Menkes, Robison claims that he increased her sales goals, saying he’d informed her of the increase during her formal March performance review. Robinson told him via e-mail that she had not been informed and had never received a copy of her review until she requested it after their private meeting in May. Menkes responded that she “must not have been paying attention.” Menkes allegedly proceeded to try to isolate Robinson at work — ignoring her, taking screenshots of spelling errors in e-mails, refusing to allow her on a trip with spirits clients — which she perceived as an attempt to force her to quit.

“Menkes constantly blew any small error [Robinson] made out of proportion, never provided any encouragement and stated countless times that [she] was ‘not the culture’ — a reference to the fact that Robinson did not have enough limited-edition shoes or sneakers or nice enough ‘streetwear.’”

“Menkes did not do this to [Robinson] before her pregnancy announcement,” Robinson wrote in her complaint.

By the end of June 2018, three months after her pregnancy reveal and about a year into her work at Complex, Robinson said Menkes tried to put her on a three-month “performance improvement plan,” which she refused to sign, telling her it was because of issues Complex’s pre-sale team had with her. She asked for specifics around the purported issues but never received any. Although Menkes had told Robinson she was likely to be terminated, she continued to work until October when she gave birth. After taking her medical leave through mid-January, Robinson did not return to work, citing her treatment pre-leave.

She defined this in the complaint as a “constructive dismissal,” a vague legal term meaning an employee was essentially forced to quit because of a hostile work environment. She’s seeking unspecified damages.

This is not the first time Complex has been sued for allegedly discriminating against a female employee once she became pregnant.

Complex in late 2017 reached a private settlement with Firra Abramov, who in 2016 sued in federal court the company, its chief executive officer Richard Antoniello and head of human resources Scott Fintzy, alleging she was fired “mere days after” complaining of pregnancy discrimination.

Now working as an independent consultant, Abramov was vice president of business intelligence at Complex for almost two years, during which time she claims to have been roundly praised, verbally and in formal reviews, for her performance.

She received in 2017 a right to sue notice from the Equal Employment Opportunity Commission. In her complaint, Abramov detailed actions by Complex after she revealed her pregnancy, like being suddenly forced to report to Scott Cherkin, who left Complex last year and now is an executive at Warner Music, whose alleged condescending and verbally abusive conduct she had already complained about. She also claims to have been effectively “demoted” within two months of her revealing her pregnancy and receiving a number of preemptive comments from executives that her pregnancy must be making it “difficult to concentrate.” After complaining to Fintzy in person and in e-mail about the sudden changes and comments to her abilities that she found offensive, Abramov said she was “abruptly fired,” and that Complex insisted on treating her dismissal as a resignation, a label she refused to accept.

Complex entered into an out of court settlement agreement with Abramov after denying her allegations in a single standard and undetailed response. Complex did not respond to request for comment on this case.

Gayle King and Norah O’Donnell All Love at Matrix Awards