Condé Nast looks poised to take a 3.5-mile leap to the financial district of lower Manhattan. 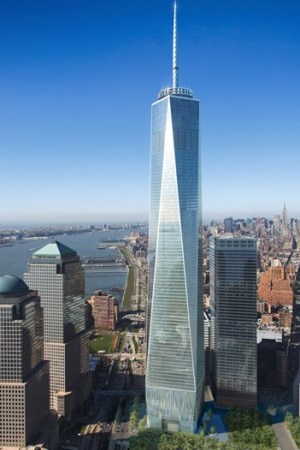 THINK OF THE TOWN CAR BILLS: Condé Nast looks poised to take a 3.5-mile leap from the tourist-packed environs of Times Square and Midtown to the financial district of lower Manhattan when construction on 1 World Trade Center is finished. In a memo to employees Tuesday, chief operating officer and chief financial officer John Bellando said the publisher is in talks with the Port Authority of New York and New Jersey to take up residence in the 2.6-million-square-foot tower, which is due for completion in 2013. A real estate source confirmed reports there is already a tentative deal between the parties, but both potential tenant and prospective landlord played coy Tuesday. A Condé Nast spokeswoman would only say the company is in active discussions regarding the new site, while a Port Authority spokesman stuck to the agency’s canned statement, which read: “There is clearly momentum both in the building of the World Trade Center site and the growing interest from potential tenants.” (Funny, that’s not what a New York Times story indicated only three months ago. The article claimed the Port Authority was having difficulty renting the site and was eager to attract a high-profile tenant like Condé Nast to encourage other companies to sign on. That would be code for “rent deal.”)

The move would allow Condé to bring all of its operations, currently split between 4 Times Square and several other Midtown buildings, under one roof. At present, the publisher is halfway through a 20-year, 800,000-square-foot lease at the Times Square flagship, which runs through 2020. However, its Midtown landlord, The Durst Organization, is also a private partner in 1 World Trade Center, a fact that would likely solve any lease-ditching penalties. Bellando’s e-mail said the firm was a party in the current talks. And although the memo said a move wasn’t likely before 2014, the potential transfer downtown set off a whirlwind of speculation throughout the company Tuesday — from how in goodness sake one even gets down to the tip of Manhattan to whether there are any fashion shops there other than Century 21? As one rattled staffer put it, “It’s like a deadline to get new jobs.” — Matthew Lynch

LOHAN’S ECKO CHAMBER: Lindsay Lohan may be in a court-ordered L.A. rehab, but she was a busy woman before she headed to jail — and we’re not talking about partying. Marc Ecko Cut & Sew will tonight unveil Lohan as the face of its fall multimedia marketing campaign at a party at Milk Studios in New York. Guests at the event will get an early look at Lohan in the streetwear brand’s print ads, which break in the September issues of GQ and Complex, and via an advanced Web technology called “augmented reality” (an ideal description of Lohan’s life).

Launching with the campaign on Aug. 10 is a dedicated Web site, Marceckomuse.com, which will house videos and interactive features featuring Lohan. The clips are triggered via a glyph that will be printed onto the ads and collateral marketing material, such as direct mail, catalogues and look books. When the glyph is held up to a Webcam, Lohan springs into action in video or 3-D hologram from within the computer screen — acting out short skits that were directed by the photography team Markus Klinko and Indrani, stars of the Bravo reality series “Double Exposure.”

Viewers can interact with Lohan — who despite her legal woes appears on the latest covers of both Maxim and Complex (which is owned by Marc Ecko) — by using their Webcam, moving the glyph around and directing her to act out a series of filmed emotions, such as joy, fear and, perhaps most fittingly, remorse.

“I wanted a classic Hollywood bombshell. I don’t cast dispersions on what she did or did not do,” said designer Marc Ecko of his casting choice for the campaign, which was shot a few months prior to Lohan’s recent 13 days in the clink for violating terms of her DUI probation. “For me, she did the most important job I needed, which was to be more than a pretty face — but actually act, and to create a dialogue that would incite our emotions: good, bad or indifferent. She is a talent. I’m rooting for her.” — David Lipke

WHERE’S J.R.? The long-rumored remake of Eighties TV show “Dallas” may never see the light of day, but the city may soon be getting some love from Jason Binn, whose company, Niche Media, publishes Hamptons Magazine, Ocean Drive and Gotham, among others. Sources said Binn has been reaching out to clients about supporting him in Texas with a new magazine, which explains his recent meal with Dallas Cowboys owner Jerry Jones at Cipriani Downtown, written about in the New York Post on Monday. — Amy Wicks