The publishing company said it’s raising the circulations of both Wired and The New Yorker by 25,000 each on the strength of their tablet businesses. 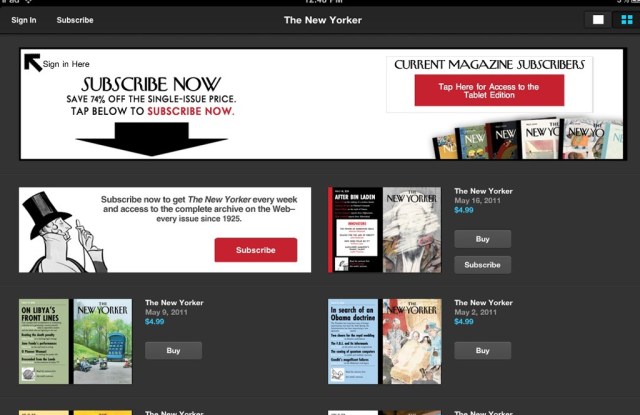 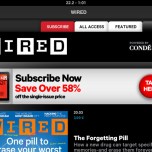 Condé Nast chief executive officer Charles Townsend at a recent interview with the Paley Center vaguely alluded to an upcoming rate-base hike in four of the publisher’s magazines. “That’s an incredible move,” he said.

At the time, only Wired had revealed the circulation increase. Condé Nast has now confirmed the others: The New Yorker, Details and Allure, which is promising advertisers it will now reach 1.1 million readers.

“Our print business has been growing faster than anyone’s. But this is four brands that are raising their rate base,” Condé president Bob Sauerberg said. “It is a bold thing to do.”

The simultaneous hike is unusual in these current print-woebegone days, something more likely to have happened last century. These days, publishers normally make such an announcement to communicate vitality — something Condé, like all publishers, is eager to do. (Condé noted the circulations of Details and Allure are going up because of sponsored promotions with retailers — the chain Ulta in the beauty magazine’s case.)

The more notable development here is that Condé said it’s raising the circulations of both Wired and The New Yorker by 25,000 each on the strength of their tablet businesses. Two years after both magazines created iPad replicas, the publisher is starting to see results at many of its titles, Sauerberg said.

“The numbers are really starting to scale,” he said, adding that by the end of the year, digital subscriptions will be well more than 1 million.

Like most major publishers, Condé Nast took a while to create a digital business. “Prerecession, we didn’t have to fool around with the digital business because of the rate of growth in the print business,” Townsend explained at the Paley Center. But then the recession shaved off 40 percent of the company’s revenue, and it was time to reorganize. Sauerberg was brought in to find new business besides print. “The postrecession moment is really the introduction of alternative platforms that take the pressure off print, not replace it,” Townsend said.

Other publishers had come to the same conclusion, and then the race was to grab a piece of the exploding audience on mobile and tablet devices.

In September 2011, Condé Nast and Hearst sent out competing press releases crowing about their then young but ascendant iPad businesses. Hearst laid claim to 300,000 subscribers, while Condé took credit for 225,000 digital-only subscribers; including authenticated subscriptions, that figure climbed to 500,000.

Since then, as more devices have come online and prices decline, tablet audiences have grown.

So where are we now?

As of September, Condé, which owns WWD, said it has an average monthly digital circulation of all its titles of 540,000 across all tablet devices, including single copies and subscriptions; Hearst claims about 573,000, which includes some sampling programs.

Including bundled and single-copy sales, Condé estimates its total tablet circulation by the end of the year will be 1.6 million. Condé and Time Inc. look at tablet audiences differently, in that they include subscriptions across all platforms — print and tablet (although Time Inc. will only start to break out its numbers in January). While Hearst is of the school of thought that readers should pay separately for digital subscriptions, Condé has increased the price of bundled subscription packages — an annual subscription to The New Yorker, including its iPad and iPhone apps, for instance, rose to $69 last year. In Condé’s view, authenticated subscriptions should be counted because they’re more lucrative than digital-only.

“Our strategy has been on getting as many people paying us as possible, and note they’re paying a higher price,” Sauerberg said.

Wired, The New Yorker and Cosmopolitan are the biggest brands in the digital realm, with Cosmo averaging 186,000 for the first six months of the year, according to the Audit Bureau of Circulations. Wired averaged 69,000 and The New Yorker 44,000. Wired and the New Yorker said their numbers through September are higher — about 81,000 at The New Yorker and about 78,000 at Wired. (The numbers are much higher when authenticated subscriptions are counted.)

Sauerberg said that Condé’s overall audience, including authenticated subscriptions, will allow it to sell advertisers large marketing programs across several platforms at once.

“That’s our secret sauce,” he said. “Making big impact programs work for advertisers. Print is a very important component of that. All the ships are going to rise when you’re solving a marketer’s problems.”

Sauerberg said growth in the tablet space is also the foundation for upcoming bundled subscriptions.
For the past two years, executive vice president of consumer marketing Monica Ray has been conducting market simulations, mainly with The New Yorker but also, to some extent, with Vanity Fair, on how much readers are willing to pay for subscriptions that bundle print and digital editions, as well as e-books, licensed products and conferences.

In the future, “you’d ultimately be getting, for X price a month, a branded experience that you could access across numerous devices,” Sauerberg said. When Condé will roll out that program has not been decided.

Sauerberg echoed Townsend’s sentiment that 2013 should be a healthy one for Condé — he expects overall revenues to increase at the same rate as this year, but that digital revenue will take up a bigger chunk of it, 20 percent instead of 15 percent.

Though the forecast was equally upbeat in January, Sauerberg blamed the economy for what was eventually lower than expected revenues.

“There are things you can’t control,” he said. “When you sit back and look back at where the economy ended up, and you compare us to our peers, it was really a terrific year for Condé Nast.”