Versace turned to Mert Alas and Marcus Piggott to photograph the ads, which pick up where February’s fashion show left off. 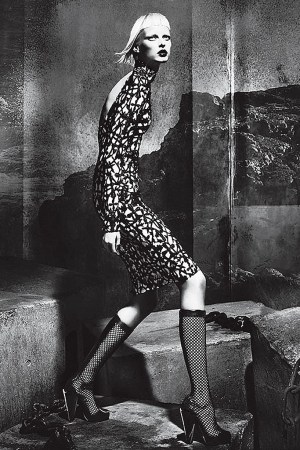 CONTINUING STORY: Versace turned to Mert Alas and Marcus Piggott to photograph the brand’s ad campaign, which picks up where February’s fashion show left off. Model Elza Luijendijk, styled by Joe McKenna, sports the same bluntly razored bangs and bleached eyebrows seen on the fall runway, delivering Donatella Versace’s Gothic and edgy underground inspiration. Photographed in a studio in London, Luijendijk poses on large cement blocks with chunky metal chains and a painted marine backdrop. The black-and-white images accent the contrasts between light and shade in the campaign, the third for the photographers with Versace. The men’s campaign features Philipp Schmidt, Dmitriy Tanner and Kacey Carrig, and was styled by David Bradshaw.