Sponsored by L’Oréal, cover could further blur the line between advertising and editorial in the U.S. market. 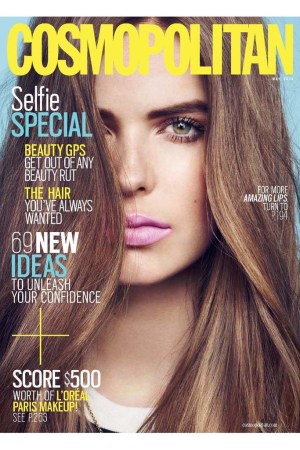 COSMO UNDER THE COVERS: Cosmopolitan may be responsible for a relatively new trend in U.S. magazine advertising that could further blur the line between advertising and editorial content — depending on whom you ask.

For its May issue, the magazine will feature a pasted-on cover for subscriber copies that is sponsored by L’Oréal. That cover displays model Robyn Lawley with a host of cover lines, including one that advertises a contest to win $500 worth of L’Oréal Paris makeup. The inside of that cover also features a full-page ad for the brand’s “Silkissime” mascara. When that cover is peeled off, the reader will see a second cover, featuring Kaley Cuoco Sweeting of “Big Bang Theory.” Sweeting appears on both the cover of the subscriber issue and the newsstand issue, which goes on sale April 8.

While the model isn’t exactly novel — it’s been used in Europe and some U.S. publications have cover wraps — what differentiates Cosmo’s issue is that the peel-off cover is part of an ad buy. In addition to the inside of the peel-away cover, L’Oréal bought 10 ads in the magazine. Cosmo declined to comment on the financials of the ad buy, but offered that it approached L’Oréal with the cover idea.

“It’s a bit like the white flap on The New Yorker,” Cosmo editor in chief Joanna Coles told WWD. “It gives me twice the real estate to explain what’s in the magazine. It’s not purely an ad. I suspect we’ve unleashed a trend.”

Coles explained that both covers were the product of her editorial team, and that apart from the L’Oréal contest cover line, it’s essentially a second cover.

When asked if the cover could be an example of blurring the lines between editorial and advertising, the editor said, “We follow the guidelines of the MPA [The Association of Magazine Media] very seriously, and Michael Clinton is the chairman of the MPA.”

Clinton, who is also president, marketing and publishing director of Hearst Magazines, was the mastermind behind the beauty-driven campaign, which stretched beyond the pages of Cosmo, and on to other Hearst-owned titles, Coles said. She added that in October, Clinton challenged all of Hearst’s publications to produce ways to drum up beauty advertising dollars.

Many of the titles rose to the challenge, but perhaps none more wholeheartedly than Harper’s Bazaar, which, WWD has learned, will have an all-beauty issue in May, a first for the fashion title.

But back to Cosmo. Vice president and publisher Donna Kalajian Lagani echoed Coles, adding that she believes the magazine has started a movement across the industry. Lagani pointed to two upcoming issues, in which two brands — an undisclosed cosmetics company and a fragrance firm — have separately bought cover wraps of Cosmo. Those issues, which will come out in the fall and in early 2015, will display the word “advertisement” on their covers, Lagani said.

All this still begs the question: If there is indeed a trend emerging, will covers of magazines soon all be wrapped in ads?

“I don’t think this will cause a slippery slope,” Lagani said. “We want to stay within the lines.”