Cosmopolitan.com Gets a Makeover

The revamp, which goes live today by 7 a.m., is essentially the template that Hearst will use for the Web sites of all of its 18 magazines. 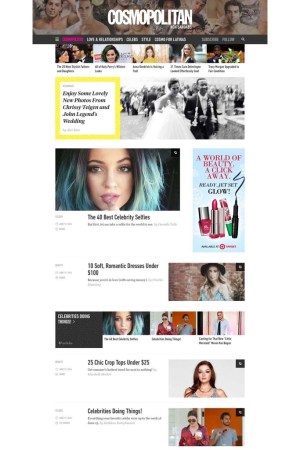 This story first appeared in the July 8, 2014 issue of WWD. Subscribe Today.

The revamp, which goes live today by 7 a.m., is essentially the template that Hearst will use for the Web sites of all of its 18 magazines. The rollout will take place over the next 12 months, with Elle getting the next digital touch-up.

From a conference room on the 19th floor of the Hearst Tower in Manhattan, Troy Young, president of Hearst Magazines Digital Media, showed off the new site, as cosmopolitan.com editor Amy Odell watched on. “This is a content marketing platform, not a CMS, which is what you traditionally see,” Young said. “Marketers are looking for a solution in a post-banner world.”

Young explained how the new site is the product of a more nimble, easier to use, system. What readers will get is a sleeker site, which includes breaking news updates, a video banner, an infinite scroll of stories and advertisements that appear seamlessly between videos of male models cuddling kittens and buzzy stories on celebrities. There is also a native advertising component in the form of a section called “Marketplace,” which is where advertisers can plug their products.

Sponsored content — or content created by Cosmo for an advertiser — is woven into the scroll and denoted by a shared byline. For example, a story commissioned by H&M will say “By Cosmo + H&M.”

In short, the site, which was developed with creative digital agency Code and Theory, is Hearst’s answer to a post-banner world.

Young said his objective is to translate content into alternate media formats, such as video, as a way to maximize traffic and ad revenue. Content must be mobile-friendly, as 69 percent of page views on cosmopolitan.com are from mobile devices, Odell said.

The editor, who came from BuzzFeed and New York Magazine’s The Cut, emphasized the speed at which her team could update and reorganize content on the site. “We could publish 20 percent more content a day,” she said, noting that Cosmo uploads up to 45 new stories a day.

The point of all this is to compete with other sites for clicks and, in turn, ad dollars. It also signals a move across Hearst to bring a sense of immediacy and a breaking news element to its magazines. Typically, those publications had followed in lock step with an industry that largely reposted stories that appeared in their monthly print editions.

Although Hearst would not divulge how much the project cost, Young offered that the new site not only allows for more sponsored content than before, but it also optimizes the shareability of content via social media. Recently, Hearst centralized its news desk to supply digital content to all 18 of its glossies. Centralizing content may have many drawbacks, but in terms of traffic, it could benefit sleepier sister sites.

Cosmo’s reach has helped bump up unique views across Hearst. The company’s 18 titles brought in a total of 100 million unique visitors in May, according to Adobe Analytics. Of that, Cosmo was responsible for nearly 30 million unique views on top of traffic, which rose nearly 200 percent year-over-year.