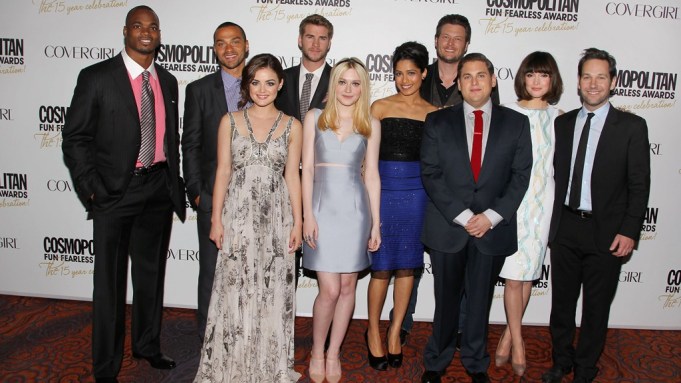 COSMOS ALL AROUND: The loud music and colorful flashing lights at this year’s Cosmopolitan Fun Fearless Awards Monday night at the Mandarin Oriental Hotel could have easily drowned out the talent in the room. That is if Paul Rudd, Jonah Hill, Liam Hemsworth, Dakota Fanning, Freida Pinto, Blake Shelton and other winners weren’t so determined to be heard. Rudd riffed, “Maybe there was a mistake…maybe it was reversed and they meant to choose RuPaul.” Apparently, even his wife, Julie Yaeger, was not buying the honor, he said: “She told me, ‘I’m not going to go to that dinner with you because that in some way will validate this great falsehood.’”

Hill, an Oscar nominee for “Moneyball,” was also armed with plenty of material. “I didn’t prepare a speech because I was positive Christopher Plummer was going to win,” he said, much to the crowd’s delight. “It’s funny because it hurts.”

After reminiscing as if he, Cosmo editor in chief Kate White and publisher Donna Kalajian Lagani were junior high friends, the 28-year-old actor admitted, “I’ve actually never won an award before. I’ve lost a bunch of them. Most of all I would like to thank you, Cosmo, for all the tips you’ve taught the very few women who I’ve tricked into sleeping with me.”

The remarks of Rose Byrne of “Bridesmaids” were considerably more clipped — two sentences to be exact — but not all that different from Hill’s. “They’ve got incredible sex tips which everyone can attest to,” she said before slinking back to her seat.

Emceed by Catt Sadler and Jason Kennedy of “E News,” the evening had a definite infomercial feel due mostly to the constant Cosmo plugs by all the honorees, which included Jessie Williams of “Grey’s Anatomy,” the Minnesota Vikings’ Adrian Peterson, country music star Miranda Lambert and Lucy Hale of “Pretty Little Liars.” At 21, Hale had the Most Exuberant Winner title locked up, with the Honorable Mention going to a YSL-clad Pinto, who referenced her grandfather with affection.

Before sending guests on their way, Robin Thicke performed. Even he seemed a bit taken aback by the special effects in the room. “There is something quite strange about it and it’s a piano — that’s strange. It sounds like ‘2001: A Space Odyssey.’”