Marion Cotillard, who won an Oscar for her portrayal of French songbird Edith Piaf in "La Vie en Rose," was taken high above Paris for her latest role. 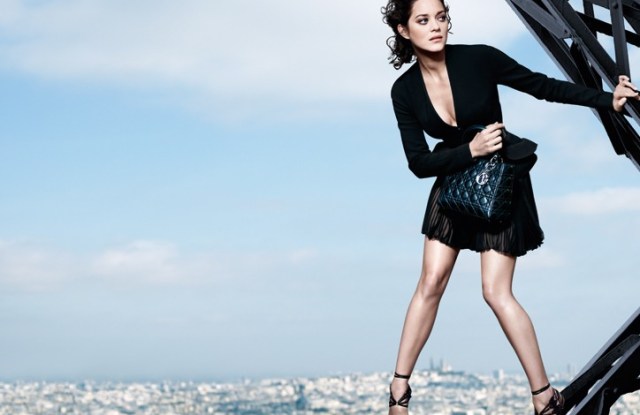 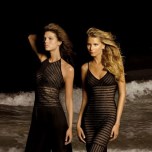 HAVE BAG, WILL TRAVEL: Marion Cotillard, who won an Oscar for her portrayal of French songbird Edith Piaf in “La Vie en Rose,” was taken high above Paris for her latest role: as the face of a “cinematic” new campaign for the Lady Dior handbag. Perched on top of the Eiffel Tower, its intricate metalwork echoing the canework pattern on the iconic tote, Cotillard posed for photographer Peter Lindbergh wearing an enigmatic expression — and a sexy black number by John Galliano from the spring collection. The spots are slated to break at month’s end in France and the U.K. and are the first in a four-part series, with Paris being only the first city and chapter. Further details about her next adventure, and what precious cargo she’s carrying, are to be revealed on a forthcoming Web site: LadyDior.com, which is set to go live in mid-November. The campaign will run twice a year.

MAKING THEIR MARC: Marc Jacobs has cast an eclectic bunch for his signature campaigns for spring, to be lensed by house regular Juergen Teller. Model Raquel Zimmerman will feature in Jacobs’ women’s Collection ads, with artist and photographer Ryan McGinley appearing for the men’s collection. As for Marc by Marc, the designer chose “trendy girl about town” Daisy Lowe. “I think she looks adorable,” he said. Meanwhile, Jacobs said he is elated over President-elect Barack Obama’s victory in the election. “For the first time in 11 years I was homesick,” he said. “I wanted so much to be in New York to feel the energy.”

ST. JOHN ESCAPES REALITY: St. John escaped to the warm climes of Miami for its first resort ad campaign in four years. But not all was calm on the set for models Liya Kebede, Hana Soukupova and Alexandra Tomlinson. Mark Seliger photographed the trio donning delicate dresses on a darkened beach as a tropical storm ripped the shore. The gloomy weather in the images, which will appear in Vanity Fair, W and Harpers Bazaar U.K., could very well be a metaphor for the economy. Yet, compared with the fall campaign, which captured models posing elegantly in Central Park and other locations in New York City, the resort promotion was intended to be ethereal. “We felt with all that is going on in the world and with the economy, it would be nice to give our customers an escape — something to aspire to and to be inspired by,” said Glenn McMahon, chief executive officer of Irvine, Calif.-based St. John.

DOMINICK, THEIR HERO: There’s a moment in the documentary film about Vanity Fair writer Dominick Dunne, screened Wednesday night, when he is met at the Paris Hilton trial by celebrity journalists and paparazzi who seem almost awed to meet him. Respectfully, they offer microphones and cameras and questions, calling him “sir.” In an interview with one, he marvels at Hilton, whom he describes as being famous “for going to parties…it’s a great career.”

The irony seems intended in a film called “After the Party,” where Dunne is brutally honest about the highs and lows of his personal life and his career as a Hollywood producer, novelist and crime journalist. “The reason I can write a–holes so well,” he says in the film, “is that I once was one.”

Two surgeries kept Dunne from the after-screening dinner on Wednesday, which was one of the first held at the restored Oak Room restaurant at the Plaza Hotel and was hosted by Tina Brown, Joan Didion, Liz Smith and Marie Brenner (though the last two in absentia).

Harry Evans said he felt the press had been “misogynist” in its coverage of Hillary Clinton and “suspended its critical faculties” when it came to President-elect Barack Obama, but called the election a “transcendental moment.” He also put in a plug for his wife’s Web site, The Daily Beast, seeming particularly delighted by the comments left under stories, so immediate and plentiful compared with newspapers. “Editors who never bothered with letters to the editor published mediocre newspapers,” he said. “So I relish all that, as a newspaperman.” Brown had just voted in the United States for the first time, and said she felt like “a jubilant Iraqi.”

Brown met Dunne at a dinner party at Brenner’s, as they relate in the film, and launched his crime writing career. In the documentary, she calls him “the defining voice of the magazine.” Since then, relations haven’t always been easy with her successor, Graydon Carter. On screen, Dunne claims Carter told him Condé Nast (which also owns WWD) would cover his legal fees when he was sued by Gary Condit. When that didn’t happen, “that was the beginning of the end between Graydon and me,” Dunne said. Carter tells the filmmakers the Condit lawsuit was just “one spat” in a long relationship. “I don’t think it’s that bad,” he said. Dunne also says his coverage of the Phil Spector murder trial was how he thought he’d end his Vanity Fair career. Carter wasn’t so sure: “He’ll probably work till the very end, whenever that is…he’s a heck of a great writer.”

LEAVING MONEY: Eric Schurenberg, the managing editor of Money, was removed from that post Thursday in a move that a memo from John Huey linked to “the sweeping changes our company is undergoing.” It is the highest-level editorial cut made at Money parent Time Inc. since the company said it would restructure and cut several hundred jobs at an estimated cost of around $100 million. The cost will appear in its fourth-quarter earnings statement. Jeff Bewkes, Time Warner’s chief executive officer, said the layoffs will save the company $150 million, beginning next year. A successor to Schurenburg is expected to be named next week, and sources close to the magazine pointed to Schurenberg’s deputy, Craig Matters, as a prime candidate. Schurenburg won a Gerald Loeb award for Excellence in Business Journalism and a National Magazine award for Personal Service, and during the four years he edited Money, the title saw both a redesign and the exits of several top editors.