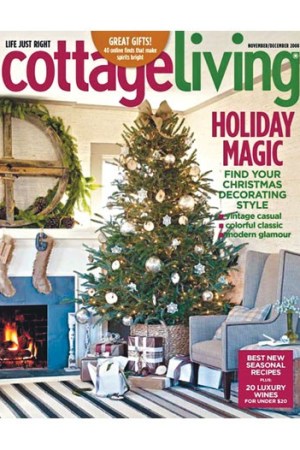 COTTAGE LIVING CLOSES: Yet another shelter title has closed as a result of the recession. Time Inc., in the midst of a major restructuring that will result in cutting 600 jobs, shuttered four-year-old Cottage Living, effective with the current November/December issue. Its Web site, cottageliving.com, will also close, but the company said it will “keep the Cottage Living brand alive in one of its other leading shelter titles, and these plans will be finalized over the next few weeks.” Further details were unavailable. The magazine employed 47 staffers, of which nine will be placed within other Time Inc. publications.

Cottage Living was considered a success when it launched and expanded its rate base from 500,000 in 2004 to 1 million in 2007. The magazine was named Startup of the Year by Adweek Magazine in 2005. Just last month, the title named a new editor, Lindsay Bierman. Cottage Living launched as a part of the Southern Progress group, which was folded in October into the newly formed Lifestyle Group of titles. The cluster includes all the magazines under Southern Progress, as well as Real Simple and All You.

“Since its inception, Cottage Living attracted significant advertiser support and fostered a loyal following among readers,” said Sylvia Auton, Time Inc. executive vice president, who oversees the Lifestyle Group. “However, the economic downturn has particularly affected the shelter market and, while the brand was genuinely loved by readers and advertisers alike, the economy inhibited its ability to grow and therefore, sadly, we had to make the decision to close it.”

According to Media Industry Newsletter, ad pages for Cottage Living through 2008 fell 5 percent to 514 pages. And it’s not the only shelter title struggling in the current economy: ad pages at Country Home shrank 24 percent to 631; Metropolitan Home’s have declined 3 percent to 1,008, and Elle Decor’s pages are off 2 percent to 1,261. Some titles haven’t survived the year: in August, Hachette Fillipacchi Media closed Home, and Hearst Magazines folded spin-off O at Home back into its flagship, O, The Oprah Magazine.

TASTY DELIGHT: Ruth Reichl agrees that “having a good meal” is a good way to fight stress caused by worrying about the tough economy, but where to eat is a different issue. On Monday, Reichl, editor in chief of Gourmet magazine, hosted the preopening preview for Shang, a sleek global Chinese restaurant in the new Thompson Lower East Side hotel, and its chef Susur Lee. Though it may seem the wrong time to open a restaurant, Lee has a following among his top-chef bretheren: Daniel Boulud, Bobby Flay, Tom Colicchio, Dan Barber, David Chang, Drew Nieporent, Bill Telepan and Jacques Torres were among those who headed downtown to sample Lee’s cuisine. As for what could tempt the average consumer to eat out during a recession, Reichl believes diners will continue to seek out either high-end, destination-type restaurants — Daniel, for example — and those serving budget-friendly comfort food. Her recommendation for a soul-soothing meal? “Wherever you can afford,” she said.

For some consumers, that means a home-cooked meal, which is good news for food magazines like Gourmet. During the first half of the year, Gourmet’s total paid circulation rose 1.5 percent, to 983,836, and newsstand sales rose 3.5 percent, according to the Audit Bureau of Circulations. The single-copy sales of issues from July through October have increased 4.5 percent, per ABC’s Rapid Report.