The gloves are off – and then some – in the British press, which this morning published some racy pictures of Carla Bruni-Sarkozy, just in time for her arrival in London. 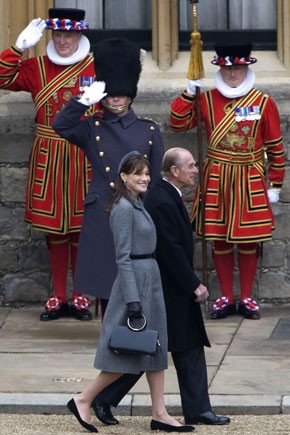 The gloves are off – and then some – in the British press, which this morning published some racy pictures of Carla Bruni-Sarkozy – just in time for her arrival in London.

On Wednesday, The Daily Mirror, The Daily Mail and The Sun all ran a full-page, black-and-white photo of Bruni – naked, with her hands covering only her privates – that will be auctioned on April 10 at Christie’s in New York. It’s the same photo that appears on Page 6 of The New York Post today. The 1993 photo, shot by Michel Comte, is from a collection by Gert Elfering. The Mirror’s headline screamed: “Welcome to Britain, Madame Sarkozy.” Later today, Bruni-Sarkozy and her husband, French President Nicholas Sarkozy, were slated to lunch with Queen Elizabeth II and tour Westminster Abbey and the Palace of Westminster as part of a two-day official visit.

And the come-hither photographs don’t end there. The April issue of British GQ features three, semi-naked, black-and-white double-page spreads of France’s first lady, shot by Inez Van Lamsweerde and Vinoodh Matadin. GQ editor Dylan Jones told WWD that Bruni-Sarkozy, “is obviously one of the most talked-about women in the world at the moment, and we would be remiss if we didn’t feature her. Not only is she absolutely beautiful, but it would be very difficult for her to renounce her previous career in one fell swoop, just because she is now France’s First Lady. More importantly, Carla Bruni is very GQ, and we have interviewed her many times in the past.”

It’s no wonder, then, that Bruni-Sarkozy was prudence – some would even say prissiness – personified when she arrived at Heathrow this morning, swathed in a dark gray Dior coat, matching pillbox hat and black handbag. Her clear stockings and demure black flats finished off the “I’m no longer the fun-loving woman I used to be” look. It will be amusing to see how she works the rest of her designer wardrobe over the next 48 hours – and what the tabloids are going to pull out next.