The “news business unit" will include print and digital properties of the Time Group, Fortune/Money Group, Sports Illustrated Group and Life.com. 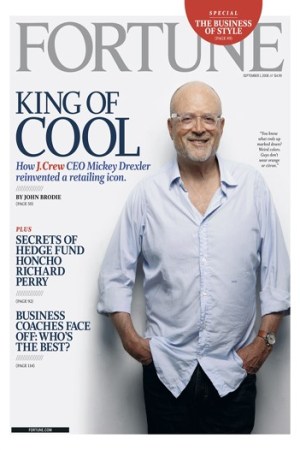 The “news business unit,” with John Squires at the helm, will include print and digital properties of the Time Group, Fortune/Money Group, Sports Illustrated Group and Life.com. Mark Ford is president and group publisher and John Reuter is moving from Mexico to become senior vice president and group general manager. Vivek Shah, formerly president of the Fortune Money Group, is now the group digital president.

CRUISIN’: Bottega Veneta has completed its first-ever cruise campaign, with Tomas Maier, creative director at the luxury goods house, choosing Todd Eberle to shoot model Colette in a residential building in New York designed by Jean Nouvel. The campaign is set to launch worldwide in December titles. “Eberle explores the nuance and subtlety of architecture,” said Maier. “He brought a unique understanding of line and color to the images, balancing abstract ideas with the individuality of the woman.” Eberle is a photographer at large for Vanity Fair. The Bottega Veneta styles in the ads emphasize bold color blocks, visible stitching and soft, yet graphic, shapes that are in tune with the geometric accessories in brightly colored leathers.

BEARMAN JOINS OSCAR: Oscar de la Renta has named Erika Bearman as director of public relations based in the designer’s New York office. She reports to Paul O’Regan, executive vice president, global communications. Most recently, Bearman was public relations director at Christian Dior. Prior to that, she worked at Burberry.

COMME DES GARCONS IN PRINT: Comme des Garçons is taking a look back over its diverse visual campaigns at the label’s Dover Street Market store in London. The fashion house has plastered images of its past campaigns, taken from as far back as 1969, when Rei Kawakubo founded the label, on a series of cubes and tunnels that have been placed throughout the artsy retail emporium. The exhibition, called “Printed Matter,” includes photographs by Peter Lindbergh, a work by artists Gilbert and George and images by the Argentinian artists’ collective Mondongo, which makes painterly collages from materials such as cookies and Plasticine, and have worked with Comme des Garçons on their most recent visual campaigns. The exhibition, which runs through Nov. 22, also includes images taken from Six magazine, which Comme des Garçons produced in the late Eighties and early Nineties.