Vonn, a four-time World Cup winner who has been plagued by injuries, is gunning to represent the U.S. on the slopes in Sochi. 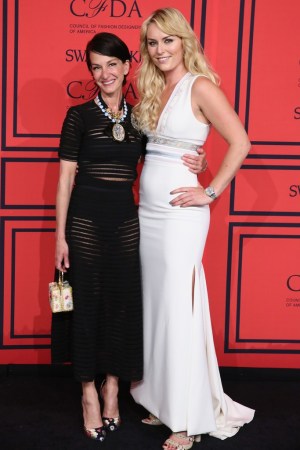 SOCHI HELMET HEADS: Six months after Cynthia Rowley took Olympic skier Lindsey Vonn to the CFDA awards, the duo have teamed up again to create four custom designs for helmets. Starting today, the Briko brand items, manufactured in Italy, will be posted on Vonn’s Facebook page so that fans can help to have the last say as to which one she hopes to wear while competing at the 2014 Winter Olympic Games in Sochi, Russia.

Vonn, a four-time World Cup winner who has been plagued by injuries, is gunning to represent the U.S. in Sochi. The U.S. alpine team will be named Jan. 26, and those competitors “will be able to wear any helmet they like, as long as it is certified by the International Ski Federation,” a U.S. ski team spokesman said Thursday.

As their names — Speed of Light, Snow Leopard, Go for the Gold and Winged Victory — suggest, Rowley’s options are far from run-of-the-mill. The Snow Leopard, for example, is a white helmet with the face of a leopard on the front.

On Tuesday, Vonn posted a photo of herself laden with shopping bags standing with Rowley in front of one of the designer’s stores. The 29-year-old gold medalist also encouraged her nearly 720,000 fans to vote. The four-time World Cup champion said Thursday that she wanted “to find a way to involve the fans in this exciting chapter in my life. Partnering with Cynthia on the design component was such an obvious choice for me given her talents and our friendship.”

Designer-minded as Vonn might be, her athletic responsibilities are always looming. At this year’s CFDA awards, the skier reportedly got a phone call from the International Olympic Committee requesting a mandatory drug test.

Rowley, who has 43,000-plus Facebook followers, is using her own page to drive more voters to Vonn’s page. “Kudos to Lindsey for enlisting the help of her fans on her special journey to the Olympics. I give her total credit for coming up with such a great idea where we were able to merge function with unique designs,” the designer said.

As of Thursday afternoon, another one of Vonn’s steadfast fans — her boyfriend Tiger Woods — had yet to mention the helmet designs to his 2.9 million Facebook fans or 3.7 million Twitter followers.