British jeweler Stephen Webster has drafted Daisy Lowe for his latest ad campaign, which will break in the August issue of Vanity Fair U.K. 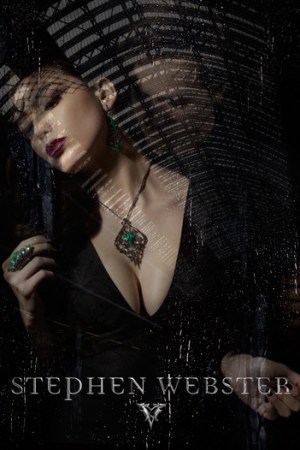 DAISY’S CHAINS: British jeweler Stephen Webster has drafted Daisy Lowe for his latest ad campaign, which will break in the August issue of Vanity Fair U.K. Shot by the British artist Mat Collishaw, the ad is dark — and sort of scary. It’s also a major departure from the brand’s past, more fashion-oriented campaigns. “We wanted more of an artistic approach this time — something that was out of left field for a jeweler,” said Anastasia Webster, Stephen’s wife and the company’s marketing and p.r. director. “She is supposed to be a beautiful femme fatale, exotic, dark and deadly.”

Lowe is pictured in a black dress — with serious cleavage — and wearing pieces from Webster’s latest “Murder She Wrote” collection of black diamond, emerald, sapphire and pink tourmaline jewelry. A gloomy image of St. Pancras train station in north London has been layered over her portrait.

Past Webster campaigns have starred Christina Aguilera, and have been shot by photographers such as Craig McDean and Vincent Peters. Aguilera remains an ambassador for the brand. Webster said Lowe — whose parents, Pearl Lowe and Gavin Rossdale, are both singers — was a perfect match for the season. “We’ve known her since she was a child, and we’ve watched her blossom. She’s become a glamorous British rock chick,” said Webster.

NICK’S NEXT ACT: Nickelson Wooster, who last month resigned as men’s fashion director for Neiman Marcus Group Services, has a new gig: fashion adviser to Gilt Man. The consulting role is effective immediately. In fact, Wooster was reached Wednesday in Milan, where he was attending men’s shows for the online retailer. Wooster, whose responsibilities include providing trend reports and creative direction for the category, reports to John Auerbach, general manager of Gilt Man and president of Park & Bond, a new full-price men’s retail site.

“Already, I’ve been doing things similar to a fashion director role,” Wooster said. “I’ll be working closely with merchants and doing trend forecasting.” He also hopes to do some product development. “I’ve made some great relationships in my 25 years in the business,” he said, but declined to divulge designers. “I’m also working on bringing some new brands to group.”

A well-known figure in the men’s wear industry, Wooster first resurfaced as a curator for Project’s upcoming August exhibition in Las Vegas. He said he’ll also be going to Paris to help Thom Browne sell his fall 2012 collection. “I’m a big fan,” he said. Wooster, who declined to discuss his reasons for leaving Neiman’s, said he hooked up with Auerbach two weeks after his departure from the luxury retailer. “Gilt is the perfect marriage for me,” he said. “Men’s wear is moving in a different direction, and it’s all based on what’s happening on the Web. I’ve never seen so much information and interest [in men’s wear] from such disparate groups of people as I’ve seen on the blogs, Tumblr and Twitter. They’re young, which is heartening.”

FROM NEW YORK TO GQ: Magazine veteran Mary Kaye Schilling has quit New York Magazine and is heading to GQ to become senior articles editor. She starts next week.

As to why she is leaving New York after having spent three years as the magazine’s culture editor? She said that the work was “grueling.”

“Doing a weekly section for three years and having to produce anywhere from 13 to 16 pages a week plus doing features and working on packages, it’s pretty relentless,” said Schilling. “Also, there wasn’t really any place to move as an editor, to do, say, just a feature well because there are really good editors now who have been there for a long time and don’t have any intention of leaving.”

That’s certainly been the common refrain from ex-New York editors over the past few years: Editor Adam Moss demands a lot a lot of work from his editors, and there’s a logjam at the top of the masthead.

“I really love Adam and he is tough. I mean, he is supertough,” said Schilling. “But in the best possible way. I have had plenty of editors that were tough and didn’t teach me anything at all and made my life miserable. Adam makes you become a better editor, and I definitely became a better editor under him.”

Schilling, 55, has previously worked at the Los Angeles Times, Entertainment Weekly and Sassy. In her new job at GQ, she will replace senior editor Dan Fierman, who left the monthly to become deputy editor at Grantland, Bill Simmons’ new sports Web site for ESPN. She is also at least the fifth new member in the past two months to join the magazine’s rebuilt masthead.

In her new job, she will specialize in entertainment coverage. So, WWD wondered how Schilling felt about Edith Zimmerman’s very personalized cover story on Chris Evans for the July GQ, a piece that ignited plenty of talk in the media world?

“I had mixed feelings about it,” she said. “Knowing where Edith is in her career, I thought it was quite amazing. But I thought it was too much Edith and not enough Chris. On the other hand, I read it to the very end. You could not stop reading that piece. Whether you liked it or not, you read to the end.”

NYLON FETES FLO: Florence Welch was charmingly quiet and awkward, using her inside voice, for the video cameras of Nylon, just outside the penthouse of The Mondrian SoHo on Tuesday night. Nylon, Habitual and Kanon Organic Vodka hosted a dinner in her honor (she’s on the July cover of Nylon), and the hipster glitterati mingled on the expansive terrace while the Pre-Raphaelite beauty gamely struggled to project into the small microphone.

Later, dishes prepared by Sam Talbot’s Imperial No. 9 were served under the stars, or at least under a tent with stars inside it. Nylon editor in chief Marvin Scott Jarrett promised to teach Kellan Lutz to play guitar, although with DJs Leigh Lezark and Harley Viera-Newton at the dinner table, the bench for musical entertainment was deep enough, despite the fact that both of them, and Welch, took the night off from performing. The crowd gradually dissolved to Mister H, where the party was already in full swing.