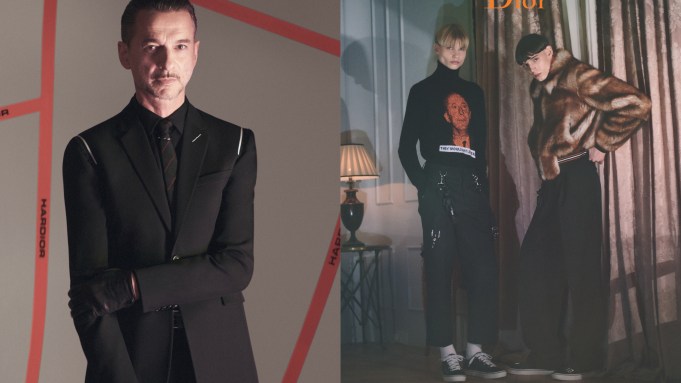 NEW WAVER: Kris Van Assche is marking his 10-year anniversary at Dior Homme with an ad campaign that includes some of his favorite things — such as Eighties pop stars — yet also marks a departure from his signature stark and sober aesthetic.

“Spanning generations and disciplines, they plot an evolution of style that subverts the classicism of Dior Homme today,” the brand said in a statement.

Gahan and Hedges — the latter seen recently in the Oscar-nominated drama “Manchester by the Sea” — were photographed in color in a studio against criss-crossed tape bearing the slogan “Hardior,” mirroring the set of Van Assche’s fall runway show, which featured Depeche Mode on the soundtrack.

They are dressed in pinstriped and deconstructed tailoring, which contrasts with the clubbing-inspired outfits worn by the models in the opposing image. Against a backdrop of opulent drapes and classical furniture, Sims pictures them in items including a fur bomber jacket and intarsia knitwear emblazoned with slogans like “They should just let us rave.”

The campaign is set to break in the July-August issue of L’Uomo Vogue today. Sims has directed an accompanying video titled #intothenight.