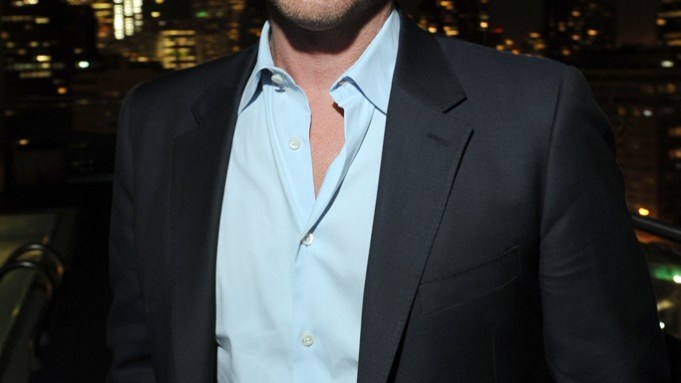 DAVE TALKS DAVE: The new Michael Bay movie “Pain & Gain” held a screening and after party Monday night at the Jimmy at the James Hotel in New York. The movie being about a couple of dim-witted bodybuilders, played by Mark Wahlberg and Dwayne “The Rock” Johnson, trying to pull off a high-stakes scheme, all the meatheads came out to support it.

Issues of the new Muscle & Fitness, featuring the stars of the movie, were scattered around the rooftop bar. And Men’s Fitness, another American Media Inc. title, cohosted the party with the Cinema Society. By the entrance to the bar, three bros huddled discussing muscles, exercise and, most enthusiastically, brand extensions.

Among them was Dave Zinczenko, high priest of the self-help fitness genre. Next to him were his business partner, Stephen Perrine, and Patrick Connors, the publisher of Men’s Fitness. Zinczenko has been preaching the tao of the six pack for so long, he’s on a first-name basis with the some of the most muscle-bound celebrities.

But Zinczenko was mainly there in his new capacity as consulting editorial director of Men’s Fitness. In February, Zinczenko joined American Media to reinvigorate the longtime Men’s Health’s rival and help the company’s other titles spawn the kind of brand extensions — books, licenses and apps — he’d been so crafty at spinning off while he was at Rodale. He said for the past five weeks he’s been consumed with Men’s Fitness, “reimagining the magazine cover to cover.”

The logo, typography and voice has been reinvented, and the first taste of the new magazine will make its debut in the June issue.

“The reader of Men’s Fitness understands fitness as a tool to getting what he wants in life, which is the great job, the great clothes, the great life,” he said.

Zinczenko and Perrine look like two characters on “Entourage,” the actor and his much shorter agent. But over decades working together at Rodale, they’ve developed a short-hand. They wore similar duds — dark-shade suits over white shirts, no ties — and finish each other’s sentences.

As part of the redesign, they’ve gone on a road show to show off the changes to advertisers in new categories they hope to attract, like fashion and beauty.

Joining them as contributors are old Rodale hands Joe Heroun, who redesigned Women’s Health, and John Mather, who had been the last creative director of Best Life.

At Rodale, Perrine had been the editor in chief of Best Life, as well as publisher of Rodale Books. When he and Zinczenko were both ousted by the company, they formed a new consulting firm, Galvanized Brands, that offers magazine publishers their services on developing print and digital book brand extensions. Though they met with Hearst Corp. and Condé Nast, it was David Pecker’s American Media that signed them up first.

“We’re very good at integrating and looking at all the channels of a brand and get to them talking to each other,” Zinczenko said. He said Fitness would start to roll out some of those extensions in June, which in the future could also encompass magazine-branded books or nonbranded books focusing on exercise.

Any of those books he works on would be released through a new multimillion-dollar deal with Random House that was revealed Monday. WWD reported on the contract back in March, but did not go into its scope, which includes Zinczenko’s own fitness publishing imprint, Zink Inc., to distribute his own books, as well as others by celebrity authors.

Zinczenko said at the moment he’s focusing on the AMI magazine. But did he rule out collaborations with other magazine publishers?

“On the book side, yes, there may be plays there, but not for magazines,” he said.

Zinczenko said he’s just getting started on his own book due to Random House, which doesn’t have a title yet.

“I have the table of contents mostly fleshed out and I’ve got a few chapters half written,” he said.