In the edition sent to subscribers, SJP wears an enormous feathered headdress by Ellen Christine Couture — an image that may seem familiar. 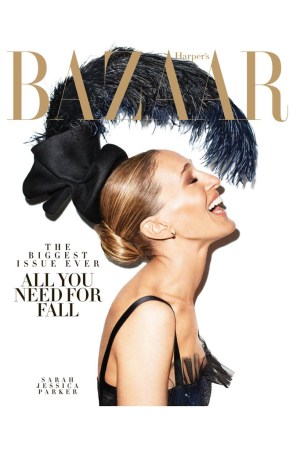 DEJA VIEW?: The September Harper’s Bazaar had some people seeing double. In the edition sent to subscribers, Sarah Jessica Parker, shot in profile, wears an enormous, $1,200 feathered headdress by Ellen Christine Couture. The image seemed familiar because just a few months earlier Vogue produced a scrapbook of images and lists, a special newsstand edition, dedicated to the Costume Institute gala. On that cover, Parker, shot on the red carpet in profile, again wore a headpiece, that time a mohawk-inspired Philip Treacy.

Fashion magazines duplicate each other all time — how else to explain the ubiquity of One Direction covers lately? — but this seemed like an especially accelerated homage. Not so, says Bazaar — Vogue had nothing to do with it. Hats are just Bazaar’s accessory du jour.

This story first appeared in the August 15, 2013 issue of WWD. Subscribe Today.

Of course, Vogue also slapped a wide-brim hat on Stefani in January and a cloche on Carey Mulligan in May. No doubt the hat arms race between the two titles will continue unabated for the foreseeable future, but it seems appropriate at this time to ask readers, to borrow a line from Stephen Sondheim: Does anyone still wear a hat?