From Michael Kors to Tory Burch, more designers are making appearances on television. 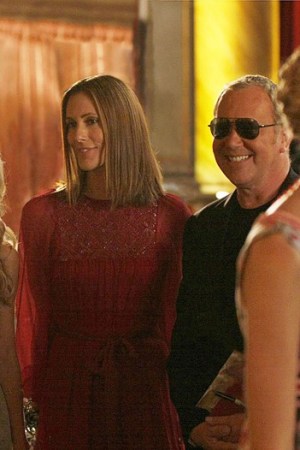 Ready for their close-ups? Designers don’t even need to be asked.

This story first appeared in the November 25, 2008 issue of WWD. Subscribe Today.

Television has discovered them, and vice versa.

In most cases, show producers have come knocking, but designers have a lot to gain in terms of brand exposure and buzz. While it’s hard to quantify what boost TV appearances give to designers’ businesses, there’s no question they offer tons of free publicity, which often can help sell designers’ products. And in this economy, that’s no small thing.

It’s practically impossible to turn on a TV without seeing a designer. In the last month alone, Michael Kors, whose featured role in “Project Runway” raised his business and personal profile, turned up at a fashion show on “Gossip Girl” on The CW network.

In addition, Tory Burch, Cynthia Rowley and Marcus Wainwright each dropped by “Stylista” on CW. Marc Jacobs, Oscar de la Renta and Peter Som welcomed Bravo’s “The Rachel Zoe Project” to their respective showrooms (after de la Renta’s appearance, traffic to his Web site doubled) and Mark Badgley and James Mischka played themselves on an episode of the ABC hit “Ugly Betty.”

Marc Bouwer is onboard as a judge for the next season of “Project Runway.” Taking the trend to a new forum, Nicole Miller, an avid foodie, will serve as a guest judge on “Iron Chef” next year. NBC’s new show “Chopping Block” will have an episode devoted to her culinary talents.

In addition to “Stylista,” Rowley’s on-air résumé includes “Project Runway” and “Tim Gunn’s Guide to Style” on Bravo, and CW’s “America’s Next Top Model,” and HGTV’s “Design Star.” She’s even played a designer on NBC’s “Law & Order.” She would love to see a celebrity “Project Runway” where well-known designers face off against each other.

When Kors appeared on “Gossip Girl” last month, five million viewers were tuned in via TV and online, or later downloaded the episode. And how he wound up in front of the camera reflects how entwined the fashion and entertainment worlds have become.

Executive producer Stephanie Savage described Kors as “a perfect storm of interest.” Earlier this year, “Gossip Girl” actress Blake Lively, a regular on Manhattan’s party circuit, became friendly with him. In addition, Savage said she and the show’s writers are “huge fans of ‘Project Runway,’” so when the fashion show episode called for a well-known designer, they thought of Kors, as did Lively, who made the request.

Even before the episode aired, many viewers had caught wind that it was in the works and were buzzing about it online. “It was a small coup for the show,” Savage said.

Viewers can count on seeing more celebrity walk-ons in the months ahead, largely because designers realize they are advancing their craft as a discipline, said Stephen Masiclat, a New Media professor at Syracuse University.

“Frankly, if you listen carefully, designers are positioning design services as services that will enhance a business’ value,” he said. “We’ll see much more of that going forward. Designers getting out more and taking parts on reality shows is part of maintaining their mind share. Designers want consumers to not only ask for a brand, but to ask for them by name.”

It is only a matter of time before shows plug guest designers’ Web sites and clothing worn by talent at the end of a segment in the same way that some already promote the music that aired, Masiclat said. But that kind of marketing will lessen the entertainment quota.

“To some degree, we’re already there,” he said. “That willing suspension of disbelief and idea that we sit behind a fourth wall — that is being quite eroded.”

Whether that happens or not, “Gossip Girl” plans to feature more designers down the road. That Lively and co-star Leighton Meester are red-carpet regulars should only make those connections easier, Savage said. “They have personal relationships with designers and that definitely makes those conversations easier. It also creates a real seamlessness between the TV world and our heightened reality. The fact that the girls exist in both spaces works well for us.”

Celebrity dressing helped Badgley and Mischka wind up on the Nov. 20 episode of “Ugly Betty.”

“We dressed America [Ferrera] when she won her first Emmy,” Badgley said. “We really liked the people on the show and they asked us to do it. We thought, ‘Why not?’”

What was supposed to be a two-hour taping in a Wall Street bank turned into 11 hours, but they made the most of it. Having trailers with a star on the door and their names — just like a real Hollywood A-lister — helped. “It was really fun.” Badgley said. “We thought they were filming ‘Gone With the Wind.’ There were so many people. They shot everything at a million different angles.”

But it was well worth the effort. He and Mischka received about “a thousand” e-mails Friday, and many guests at a Saks Fifth Avenue breakfast and in-store appearance in Naples, Fla. mentioned it.

“The reach of those shows is crazy,” he said. “Fashion and Hollywood are so complementary these days. Any time you do any celebrity dressing, a TV show with a fun fashion slant or any of that stuff, it’s major for name recognition.”

Badgley and Mischka have already lined up their next gig. They will appear as celebrity guest judges on the finale of Lifetime’s “Blush: The Search for the Next Great Makeup Artist” on Dec. 16.

Som is also getting his name out there in an unexpected way. He has taped an interview about Fifties fashion that will be part of the extras featured on the DVD for the second season of AMC’s hit, “Mad Men.” The show’s producers approached him, since one of his collections was inspired by that period.

When Burch appeared as a guest judge on “Stylista,” a reality show on which contestants compete for a junior editor job at Elle magazine, two million viewers tuned in. The designer noted she is friends with Elle’s creative director, Joe Zee, and fashion news director Anne Slowey, who appear on the show, as well as Robbie Myers, editor in chief.

“Elle is incredibly supportive of me and I would not hesitate to support them right back,” Burch said. “I was a little tentative at first. But I knew it would be great for our business and the show centered on our tunic dress.”

Her performance could have ripple effects on sales, considering the silhouette had already “blown out” of stores before the show aired, said Burch, and tunics are basics in her collections.

Martha Stewart recently chatted with Isaac Mizrahi and Ralph Rucci on her talk show, and she plans to welcome more designers next year, with Vera Wang being at the top of the list. Last year she even arranged for Valentino to cook his favorite pasta dish and Arnold Scaasi unveiled a new dress collection.

Lisa Wagner, supervising editorial producer of A&E’s “The Martha Stewart Show,” said, “It did seem like a little bit of a departure to all of a sudden have Martha having designers on the show. But it is not unlike having the greatest chefs and really fine craftspeople. Designers have been a really great addition to the show.”

Stewart also seems to be ready to expand the guest designer trend by one dimension. After reading an article about how Millard “Mickey” Drexler has turned around J. Crew, Stewart was eager to have him on her show. He opted not to appear, but Stewart will continue to pursue individuals who interest her and viewers.

While Nicole Miller’s love of food and cooking made doing the two cooking shows an easy decision, the president and chief executive officer of her company, Bud Konheim, said, “The most meaningful opportunities for us are those focused on design and fashion — that make a direct line connection from Nicole and our product to fashion media, customers and retailers.”

But her fashion responsibilities trump everything. “The first question we always ask is, ‘When do you need her?’, because she wants to be in the design studio at the important times and not be distracted from her work.”