The British Vogue editor steered the title for more than 20 years. 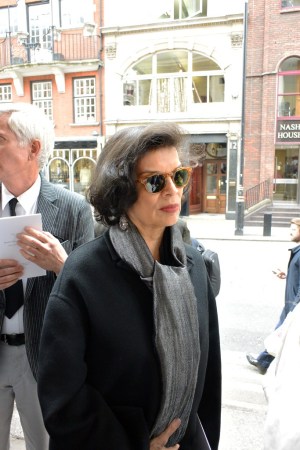 Anna Wintour, Manolo Blahnik, Twiggy, Grace Coddington, Mario Testino, Bianca Jagger, Lady Sarah Chatto, Jasper Conran and John Frieda were among the guests at a memorial service on Monday for Beatrix Miller, the shy and fastidious former editor of British Vogue who steered the title through the Sixties, Seventies and most of the Eighties, a pack of Rothmans cigarettes by her side and a quip forever on her tongue.

Miller, who died at the age of 90 in February, and who was known variously as “Miss Miller,” “Beatrix” or “Bea,” depending on one’s status, served as editor of British Vogue from 1964 to 1986. She promoted and supported generations of editorial, fashion, photographic and creative talent, including Coddington, Liz Tilberis, Anna Harvey, David Bailey, Patrick Demarchelier, Bruce Weber, Mario Testino, Norman Parkinson and Lord Snowdon.

Art historian Sir Roy Strong was among the speakers at the service, which was organized by Jonathan Newhouse and Nicholas Coleridge at St. George’s, Hanover Square, a few minutes walk from Vogue House in London. Strong recalled Miller telling him in the Sixties: “I’m trying to educate Bailey — I ring him up every day, and make him learn new words,” she said, referring to the coarse East End snapper whose work is currently the subject of a retrospective at London’s National Portrait Gallery.

Strong remembered Miller, “in her dark glasses, inhaling and exhaling a Rothmans cigarette,” as a self-effacing figure, a woman of trust and integrity, and “one of those rare people you did not ever want to let down.” Nicky Haslam, who wrote a column for Miller’s Vogue, said after the service that he found her reserve “very charming. She was the very opposite of [Diana] Vreeland. She drew you out in a different way,” he said.

Sandra Boler, the former editor of Brides who had worked for Miller, recalled her “crisp, precise and economic” use of language. “She never used two words when one would do. She could be brusque — but it was a way of hiding her shyness. She was kind and sympathetic — but never sentimental,” Boler said, adding that Miller was a “born observer.”

Miller presided over the magazine as the Sixties were coming into full swing, and she relished transforming Vogue into the title that would lead the way. “British Vogue was at its peak in the 1960s, they were the golden years,” said David Sassoon, following the service. “Beatrix did a tremendous amount for British designers — and she was wonderful in encouraging the mood of the Sixties [among them].” Zandra Rhodes said Miller’s avant-garde Vogue was a major influence on its American sister title.

Joan Burstein, founder of Brown’s, admitted that she was always terrified of Miller. “She was so cool, calm and impressive. And she was very supportive of us — in as much as she could be.”

During the service, Wintour read “Dusk in Fierce Pyjamas,” a piece that Miller had written for the 75th anniversary issue of British Vogue in 1991 about her experiences working for Vogue in New York, while the British title’s current editor Alexandra Shulman read “Who Wore What When” by Angela Carter, which appeared in Vogue in 1975.