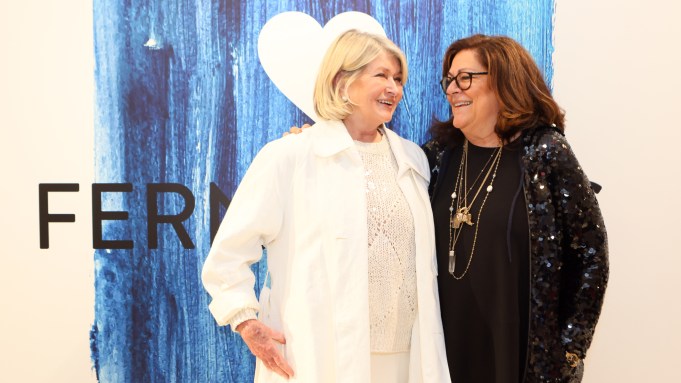 Before establishing her series of talks, Mallis served as executive director of the Council of Fashion Designers of America from 1991 through 2001. In 1993, with then CFDA president Herman, Mallis centralized fashion week in New York’s Bryant Park by creating 7th on Sixth. She also had a senior role at IMG Fashion from 2001 to 2010 and ushered in fashion weeks in Mumbai, Berlin and other locales.

The guest of honor described the occasion as “overwhelming,” taking a minute to compose herself and dab a few tears. “I’m going to get emotional. It’s such a sense of accomplishment and love and affection from the industry. Between everybody who is here and what Nordstrom has done has just blown me away. Their support of this and what they have done with this party is mind-boggling,” she said.

More than anything, it validates the Fashion Icons conversations, according to Mallis, who described them as “a master class and an archive for the industry of all the most creative leaders.”

The idea that their personal stories will live on through the books is essential, Mallis said. “As I keep saying, all of these people are more than a name on a label. They are real people. Who is their grandmother and why were they so influential? What was the bedroom like that they grew up in? What informed these people? How did they succeed and reinvent their lives many times? So many of them went bankrupt, are still in there and went on to huge success. I’m fascinated by it,” Mallis said. “We all read about collections and profit stories, but who are they.”

Creating the “Fashion Icons” series was Mallis’ reinvention after 20 years of running New York Fashion Week and recognizing that it was going in a direction that was not where she was. “This is almost more important than the tents were, because this is real. This lives on. The tents [in Bryant Park] for me were ‘Brigadoon.’ They were there and now they’re gone. Now people talk about the tents like they do about Studio 54 — ‘Oh, you had to be there. If you weren’t there, you can’t even imagine how great it was.’”

New York Fashion Week’s longtime lead security consultant Ty Yorio certainly was. At Wednesday’s book party, he recalled seeing Mallis in action through the years. “In the police department, we call it somebody who can think on their feet. And she can — instantly,” he said. “My favorite memory was when she put everything together in 1993 with the tents in Bryant Park. It was against all odds and [people asked], ‘Is this thing really going to work?’”

Hunter, who works closely with Beyoncé, said he always wanted to connect with Mallis when he was starting out 15 or 16 years ago. By chance, the opportunity presented itself at a Stuart Weitzman store, where they both happened to be shopping during the holiday season. “She is fashion week. She is the start of all of this to me. If that event never happened, where would be today fashion-wise? It helped to get to see fashion from around the world here,” he said. “I always admired her. For her to be so iconic and still approachable, I love her for that.”

Like Morris and Herman, Hunter has a book in the works that Knowles wrote the foreword for and Bill Porter penned its afterword. Entitled, “Makeover From Within: Lessons in Hardship, Acceptance and Self-Discovery,” the book is due out in October and is now available for preorder. “Everybody wanted me to do a fashion book and style book, but I wanted to tell my story first so they can get to know me. There are many more things to come,” Hunter explained.

Herman said of Mallis, “The biggest contribution she has made is what everyone has deified her for, which was putting together the fashion shows in Bryant Park — with me, definitely with me. On her epitaph, that will be her moment of greatness.”

But lest anyone forget her current gig, Notdstrom sent guests home with copies of “Fashion Icons 2.”