Bloomberg’s Pursuits Gets a Makeover

Before the redesign by two Condé veterans, the luxury magazine was edited by the small team behind Bloomberg Markets, its more trade-oriented sibling magazine. 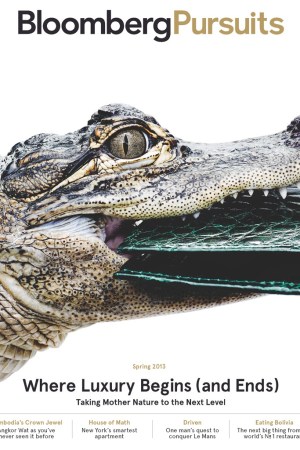 Playgirl Is Back and Very Different From Its Last Issue

DIFFERENT PURSUITS: Last year, Bloomberg LP jumped on the luxury magazine bandwagon with Pursuits, its twice-a-year glossy sent to the customers of its exuberantly priced terminals.

Few people took notice. With cover subjects like investment banker Jim Glickenhaus, a household name only among the Davos set, and a creative direction more suited for a regional business magazine, the initial iteration had little chance against the likes of the Financial Times’ How to Spend It and Departures.

So the deep-pocketed Bloomberg — which seems determined to build a print profile — hired an editor and an art director and went back to the drawing board. The new issue, out in March, has a redesigned appearance that wouldn’t look out of place at Condé Nast.

That’s not a coincidence. Pursuits is upping its frequency this year to four times, and is set on attracting new advertisers. To do so, Bloomberg has taken a page and then some from the Condé Nast handbook, swiping two Condé veterans, editor Ted Moncreiff and art director Anton Ioukhnovets, to remake the wonky glossy with some of that 4 Times Square pizzazz. Before them Pursuits was edited by the small team behind Bloomberg Markets, its more trade-oriented sibling magazine.

The spring issue carries 41 ad pages, 11 more than the premiere issue in January 2012. The rate base is still 375,000 — a captive audience of high-spending consumers who are all Bloomberg terminal customers.

Moncreiff started at Condé Nast Traveler nearly 20 years ago and was a fixture there until he jumped to Newsweek in 2009; brief stints followed at W and Condé Nast Ideactive. Ioukhnovets was design director at W until December, and before that art director at GQ.

They started working on the redesign eight weeks ago. First to go were the old logo — it is now smaller, with equal emphasis placed on Bloomberg and Pursuits — and the stodgy covers. Free from newsstand pressure, they could afford to be conceptual — a crocodile is biting on a $500 Bergdorf Goodman private label men’s wallet.

They also restructured the layout. There’s now a front of book that is a hodgepodge of subjects that’ll interest the billionaire next door. One feature offers helpful advice on what to do about your broken Chris Ofili sculpture. Another looks at the best watches on the market (perfect editorial for those watch advertisers all the glossies love).

“The idea is that you can’t live with just one watch,” Moncreiff said.

A third recurring feature, on drinks, visits with the most exclusive wine club in the world. “They meet at Davos every year,” Moncreiff said, though he also pointed out they donate generously to charity.

While the subject matter is still in sync with the interests of the average terminal user, the magazine also emphasizes the kind of long-form features that would appear in Traveler or Architectural Digest. Of the five features in the well, one long-read gives a behind-the-scenes look at Noma’s first permanent location outside Copenhagen while another tours the luxurious apartment of a reclusive Manhattan power couple — they are not named, though the mathematically precise apartment suggests it belongs to someone in the tech world. Only one profile, on racing mogul Tracy Krohn, is a leftover from the earlier Pursuits.

Contributors are a mix of reporters and editors from Bloomberg’s pool of talent as well as outsiders — New York magazine’s Justin Davidson wrote the interiors story, for example.

Moncreiff said the thinking behind the new direction was not to imitate other glossies. “My view of most luxury magazines is that they’re not very deep,” he said. “These are stories that go behind luxury products, and our readers, finance guys, are interested in the underlying value of things.”