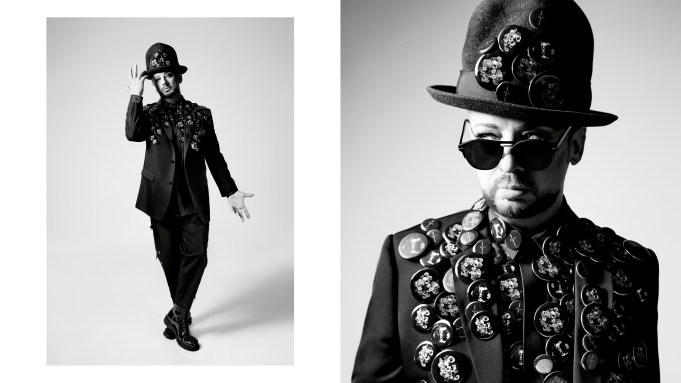 In the portfolio — photographed by Willy Vanderperre in the studio and on the streets of Paris — the singer and DJ sports raw-edged tailoring accessorized with harnesses from the house’s spring 2017 collection customized with punk Toru Kamei souvenir pins.

“I really tried to translate what I think Dior Homme is right now. It’s about music, it’s about cinema, it’s about fashion…It’s about a certain memory I have of the Eighties that remains very much relevant for 2017,” said Van Assche. “Boy George, when I was a kid, was one of the first to have this message about difference being OK; he was such a major influence on my generation. That idea of freedom and being a rebel — which he still is — is really something that has stayed with me.”

Also featured in the campaign is American actor Rami Malek, of “Mr. Robot” fame, clad in artisanal eyelet and lace-up outerwear pieces from the collection. “There’s something very Flemish painting about him,” observed Van Assche. “They have an almost cold vibe to them,” he added of the color portraits of Malek, who attended the brand’s fall 2016 show in Paris.

Night shots of Russian model Ernest Klimko pulling a tough kid stance in a bomber jacket against a backdrop of colored bulbs wink to the amusement park theme of the house’s spring show.

Making a comeback, meanwhile, is rapper A$AP Rocky, who appeared alongside filmmaker Larry Clark, French actor Rod Paradot and model Dylan Roques in the house’s fall 2016 campaign. Van Assche said the portfolio garnered the strongest reaction out of all of his campaigns for the house so far.

“This time [for the new campaign], we thought it would really be fun to take it down into the streets and give it a really different look,” said the designer. Regarding his loyalty to A$AP Rocky, with whom his relationship goes back years, Van Assche said: “I don’t really like this idea of working with people for a few months and then moving on to other people – it’s not just about finding a famous face and putting a logo on it.”