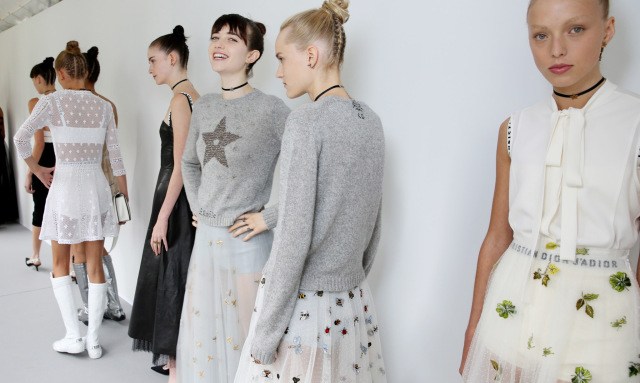 PARIS — When Dior selected Maria Grazia Chiuri as its seventh couturier, the Italian designer was hailed as the first woman to lead the venerable French house.

What’s more, Chiuri is emerging as the ringleader of a battalion of female talents, including the team assembled for her first advertising campaign, in which photographer Brigitte Lacombe captures the complicity and complexity of twin models Ruth and May Bell.

In a series of calm, intimate portraits, the tomboyish flair of Ruth Bell becomes a foil for her sister’s ethereal femininity — except when they subtly swap guises.

“I really wanted to have a woman photographer,” Chiuri said in an exclusive interview about the ads, slated to break in an array of February magazines, starting with U.K. titles in early January. “I’m really interested in different interpretations of femininity, and [Lacombe] really captures the expression of different attitudes.

Rendered mainly in black-and-white, the images represent a break from the arch fashion-driven intensity of recent Dior fashion campaigns — and the glamazon character portrayed by Charlize Theron in J’Adore perfume advertising.

Grace and fragility are among the qualities Chiuri wished to exalt in the campaign, along with a contemporary mood and youthful verve. Among the clothes featured are T-shirts bearing the slogan “We Should All Be Feminists.”

“I wanted to start a dialogue with a new generation of women, which is the Millennial youth,” Chiuri said.

The Bell sisters are emblematic of that generation, and the close and playful relationship of the sisters is plain as they squeeze hip-to-hip on a vintage armchair, or slouch on the floor.

Occasionally, Chiuri heightened Ruth Bell’s boyish allure by dressing her in fencing-inspired outfits. At other times, she dissolves it with a diaphanous bustier gown. Likewise, May Bell flits between mannish tailoring and embroidered tulle.

Chiuri described a “beautiful time” on the set in which their complex and diverse personalities emerged.

Chiuri tapped Karl Templer for the campaign, reuniting her with a stylist synonymous with her years as co-creative director of Valentino, now led by Pierpaolo Piccioli, who also continues to work with Templer.

She called Chiuri “strong, direct open and generous” as a collaborator with “a very clear idea about how women should be portrayed and looked at, which is a point of view that I share and understand.”

The spring ads are but one element in a wider project Dior calls “The Women Behind the Lens.”

In the lead-up to Chiuri’s debut, Dior enlisted a number of female photographers to document fittings, the atelier and the backstage scene. These include Janette Beckman, Sophie Carre, Maripol and Chloé Le Drezen.