Biannual fashion, art and culture magazine Document Journal’s spring/summer issue was almost done and dusted by early March, with no less than five fashion covers starring the likes of Kaia Gerber and shot by different photographers including Mario Sorrenti and Willy Vanderperre.

But then the coronavirus swept through the U.S. and editor in chief and creative director Nick Vogelson decided to create five additional artist covers at the last minute to reflect what was happening.

For those, he tapped Louis Vuitton’s men’s wear designer Virgil Abloh and four other artists — Judy Chicago, Christopher Wool, Mel Bochner and Edgar Heap of Birds — to come up with their own interpretations.

“We felt it was vital to hear from some of the most significant artists working today, across a range of disciplines, on their responses to the global pandemic in the form of a series of special limited-edition covers,” Vogelson said in his editor’s note.

For his cover titled “The glass is half full, always,” Abloh is pictured walking through the woods dressed in camouflage and holding an axe and a modern chair, with a receipt from a Lidl grocery store in Germany laid on top of the image.

Document is known for giving its high-profile contributors creative freedom and while the meaning might not be immediately obvious to all readers, Abloh explained in a statement that “when fashion once needed fashion to make fashion images, in this time, that rationale has been reduced to necessity.” “This moment of time is a line drawn in the sand. The metaphors in the image are as thick as the forest in the background,” the designer, artist and DJ added.

For his part, Wool created a monochromatic cover using the universal symbol for positive as well as the emblem of the International Red Cross, questioning our role in the progress of humanity and Bochner overlaid languages on top of one another, reminding the reader that humanity and the shared human experience is held together through communication, according to Vogelson. 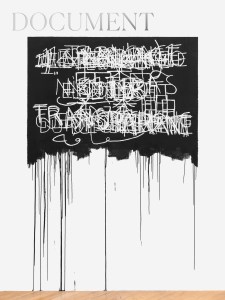 For the remaining two art covers, Heap highlighted ceremonial sites and places of healing throughout the U.S. in his native sovereign language, while Chicago referenced Native American legend, emphasizing human culpability in the climate change crisis and the COVID-19 pandemic.

Vogelson added: “Taken together, these covers and the dynamic conversations and features that underpin the issue help illuminate the extraordinary perseverance, will and creativity that animate our world and remind us that even in isolation, we are never truly alone.”

Away from the covers, the 488-page issue features Dior’s Kim Jones and masked singer Orville Peck exploring their inspirations, while designer Simone Rocha and actor Gwendoline Christie reminisce about the first time they met.

For the next issue, which will be released at the end of September, Vogelson is waiting to see what happens and if they will be able to produce shoots during the summer.

“Whatever happens I think it’s important to challenge ourselves in how we make pictures and images,” he said.

Designers at Home: What They’re Doing to Stay Sane and Entertained