Lindsay Lohan appears in her first TV commercial as the new face of Fornarina... Internet advertising was up 10.6 percent in 2008... 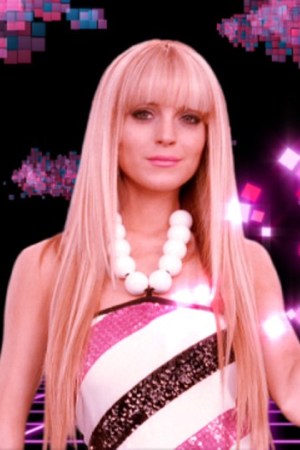 DOES SHE STILL ACT?: Lindsay Lohan seems to be doing more photo shoots and TV commercials these days than films. An Eighties vibe with a graphic setting and neon brights characterize Lohan’s first TV commercial as the new face of Italian denim and contemporary brand Fornarina. In the 40-second advert, the actress plays a modern Alice in Wonderland, complete with a long blonde wig, and explores different settings created with fluorescent props that float around. The soundtrack is based on onomatopoeic sounds, typical of the world of comics. “The spot is a subtle tribute to the genius of Serge Gainsbourg and to the sensuality of Brigitte Bardot,” said director Marco Bragaglia, of the commercial, which was shot at Hollywood Center Studios in Los Angeles.

The colorful pin-up style garb Lohan dons is part of a capsule collection that is already on sale as Special Edition at the Fornarina flagship in Milan and will be available in the U.S. in a few weeks. Retail prices range from $95 for a stretch cotton T-shirt to $233 for a pair of jeans and up to $355 for black patent leather boots. — Chiara Hughes

THE WEB CONTINUES TO GROW: While print advertising took a nosedive last year — and continues to do so in the first half — a new report from the Interactive Advertising Bureau and PricewaterhouseCoopers notes Internet advertising was up 10.6 percent in 2008, to $23.4 billion. During the fourth quarter alone, Internet ad revenues totaled $6.1 billion, marking the first time the interactive ad industry has surpassed $6 billion during a single quarter.

Search continues to be the main driver of revenue growth, according to the report, showing an almost 20 percent increase over the prior year, followed by banners and classified advertising. And retail still represents the largest ad spending category, accounting for 22 percent of revenues; however, the category was down from 25 percent in 2007. But while the 2008 Web numbers were good, not everyone is bullish about the outlook for 2009. Following the report, eMarketer on Monday revised its online ad spending outlook for 2009. The agency had previously forecast ad spending would grow by 8.9 percent this year, but has slashed its growth outlook to 4.5 percent, to $24.5 billion. — Amy Wicks